If androids dream of electric sheep, do electric cars dream about endless charging points? Range anxiety is a term that has long been associated with electric cars. The early years of the EV revolution were full of worry over whether or not you’d actually make it to the end of your journey or not. But that was then.

The ever-more rapid advances made in battery technology and a recharging infrastructure mean that those years are long gone, and electric vehicles are genuinely useable every day, even if you regularly do long journeys. Which electric cars, though, will take you the furthest on charge these days?

Here are 10 cars with impressive manufacturer-claimed ranges - which, while they should be taken with a pinch of real-world salt, rank them at the sharp end of the growing line-up of EVs. 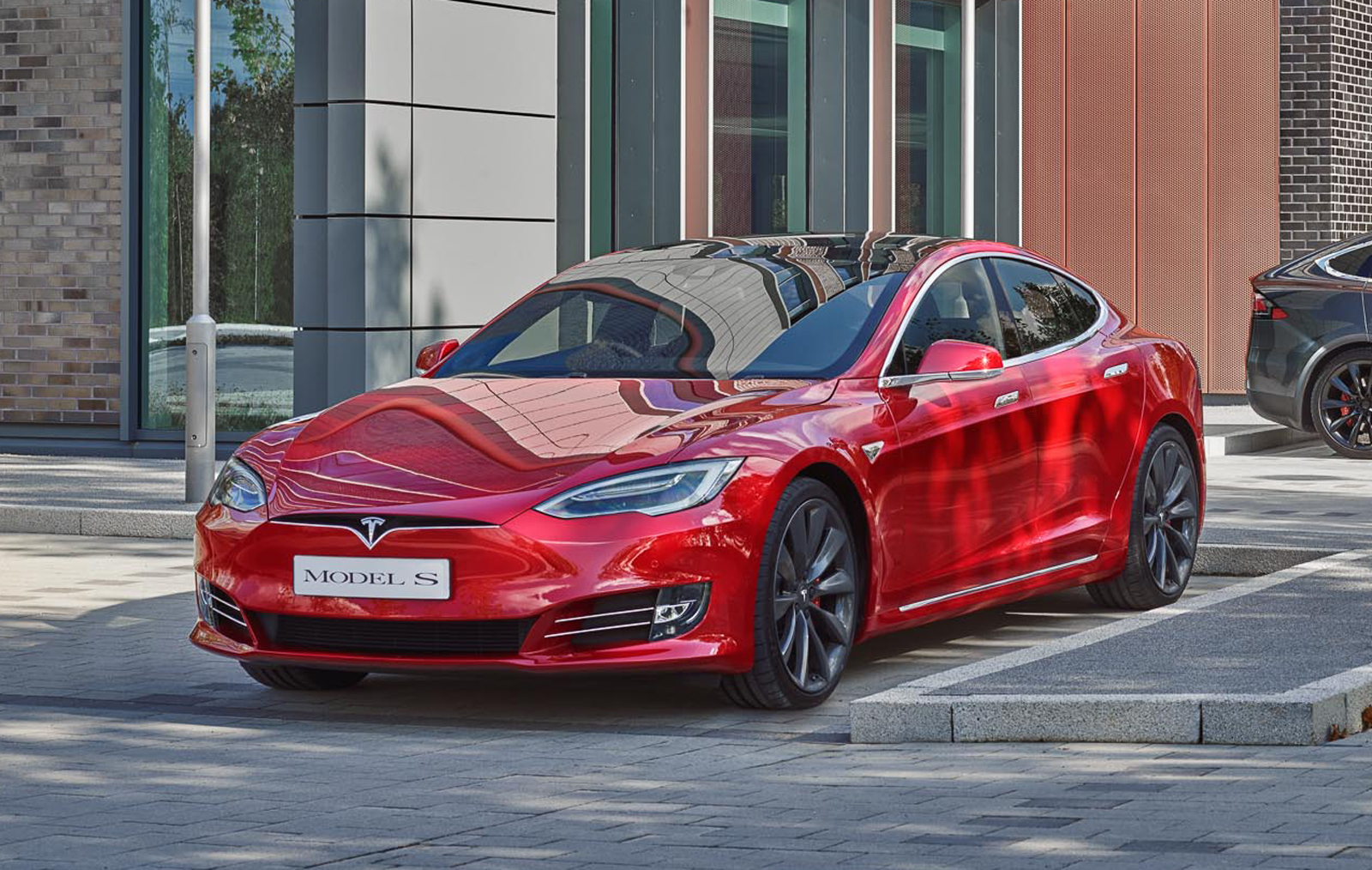 The Tesla Models S has been around for almost as long as electric cars have been a thing, and throughout its decade-long life, it has sat near the top of the tree for battery range. It is claimed to do more than 400 miles on a charge, although that’s an estimate based on US-style testing, not European figures. So you're more likely to see something in the three hundreds - although that's still impressive.

Not only that, with easy access to Tesla’s dedicated high-speed charging network, which covers much of the UK's motorway routes, a jaunt from London to Edinburgh certainly isn’t out of the question. 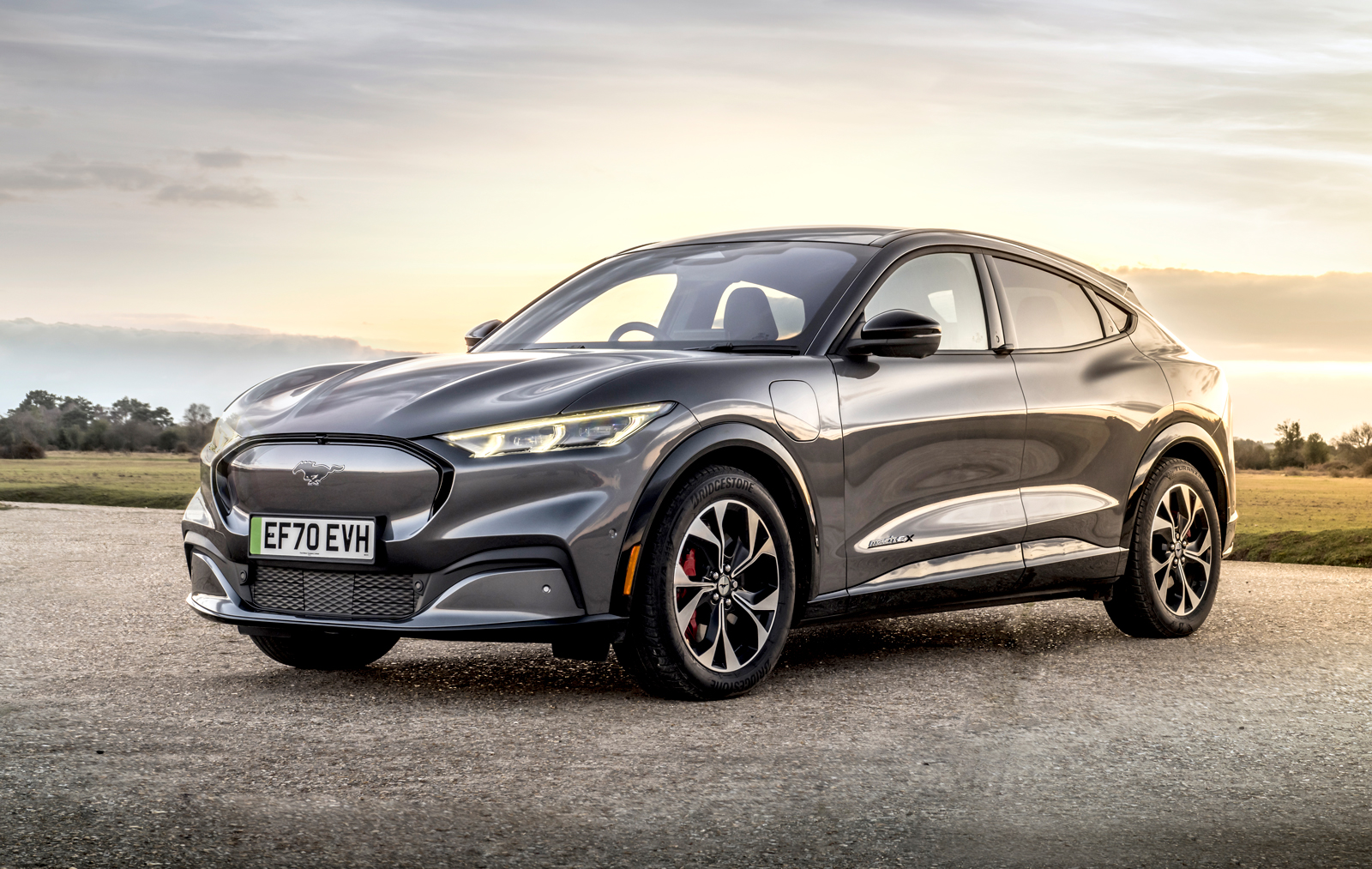 “Heresy!” they cry. “A travesty!” Whatever your views on Ford attaching the Mustang badge to its large full-on electric SUV, there’s no doubting that you can go a long way in it.

It comes with various electric-motor and battery options, but the one you want if you regularly do longer trips is the 88kW battery and single motor, which according to Ford's stats, will get you a lengthy 379 miles between charging stops. Sure, that number might shrink if you're using the heating or the air-con, but it's still good enough to land Ford's spacious entry high up our list. 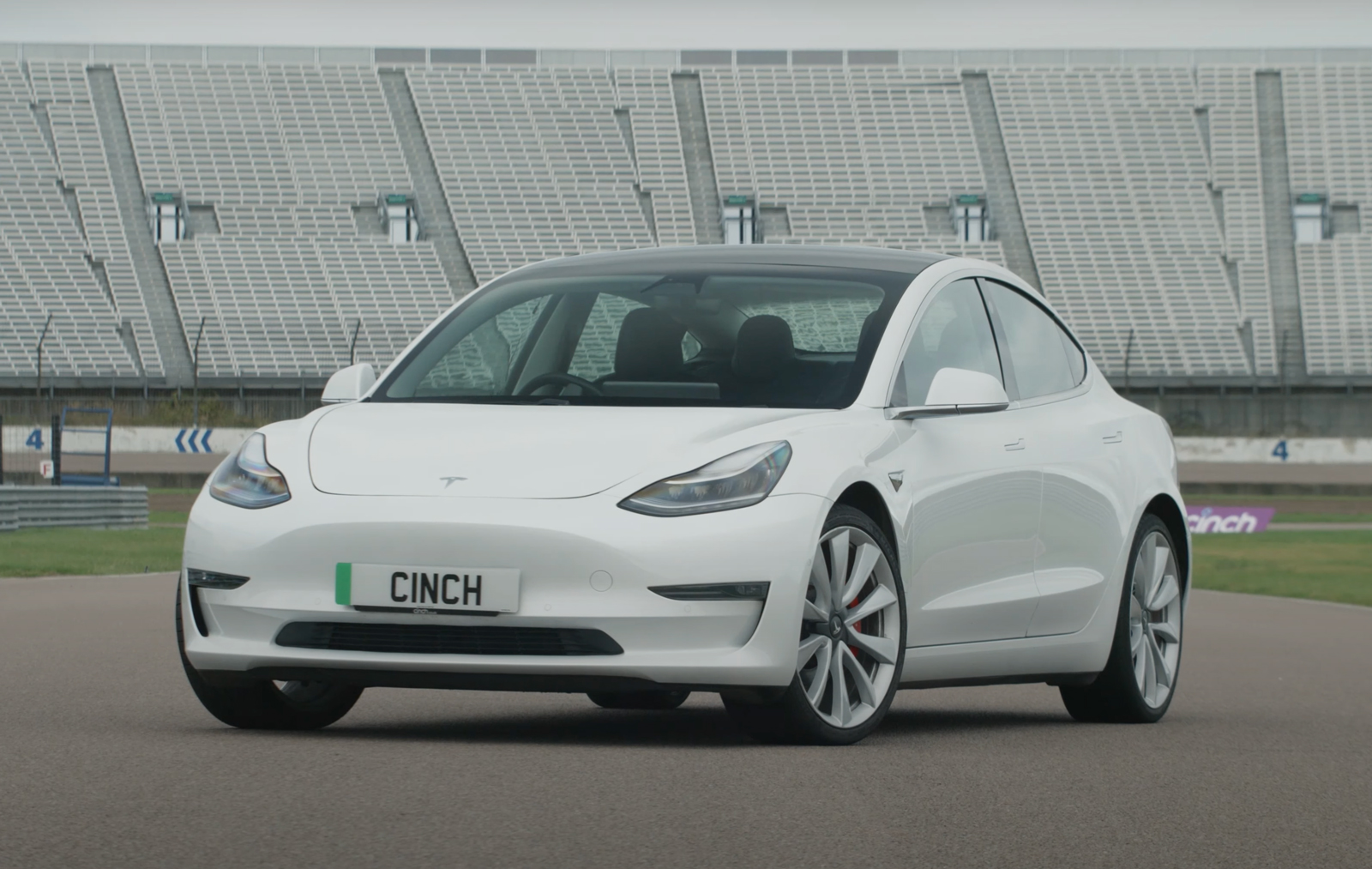 Tesla simply cannot build the Model 3 quickly enough, and it’s easy to see why people absolutely love the thing. For a start, even the entry-level model can do almost 280 miles on a charge, according to its maker, and it costs from just over £42k when new (cinch has Model 3s for under £40k). It's really shaken up an electric car storm.

Buy a new example of the Long-Range model and you'll quickly see the list price click over £50k, but it's a great offering that can do a manufacturer-claimed 360 miles on a charge. Like the Model S, even with a reduction in real-world distance, you've got Tesla's Supercharger network to support you. Plus, the Model 3 has a high-tech interior that’s dominated by the large touchscreen, and it even allows you to torment your passengers with digital whoopee cushions. Really! 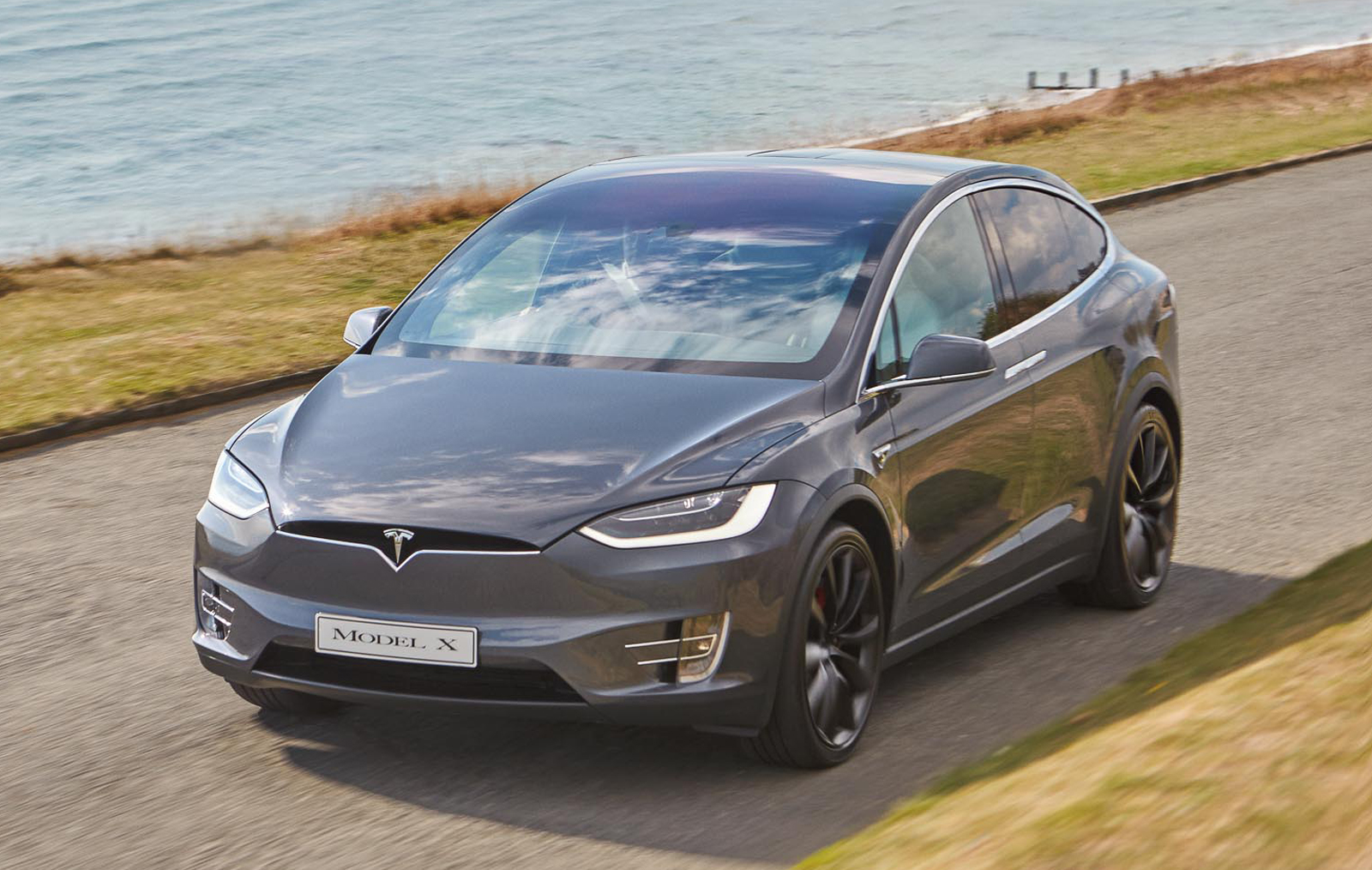 Yup, it’s that pesky Tesla brand again, but you can’t deny that the firm's certainly got its act together when it comes to making electric vehicles that can travel a long way. The Model X is the brand's SUV (although it's predictably road-focused) and it has performance that makes many supercars look a bit tardy. It’ll cover the 0-60mph dash in a claimed 3.8 seconds and go on to a top speed of 155mph.

As exciting as all of that is, it won’t be what your neighbours talk about. The first time you pull up at home and open the ‘falcon-wing’ rear doors, which lift up DeLorean-style on electric motors, your neighbours’ chins will hit the floor and your kids will instantly be the coolest in the street. You can show it off far from home, too, with a claimed 360-mile range - and access to that Supercharger network. 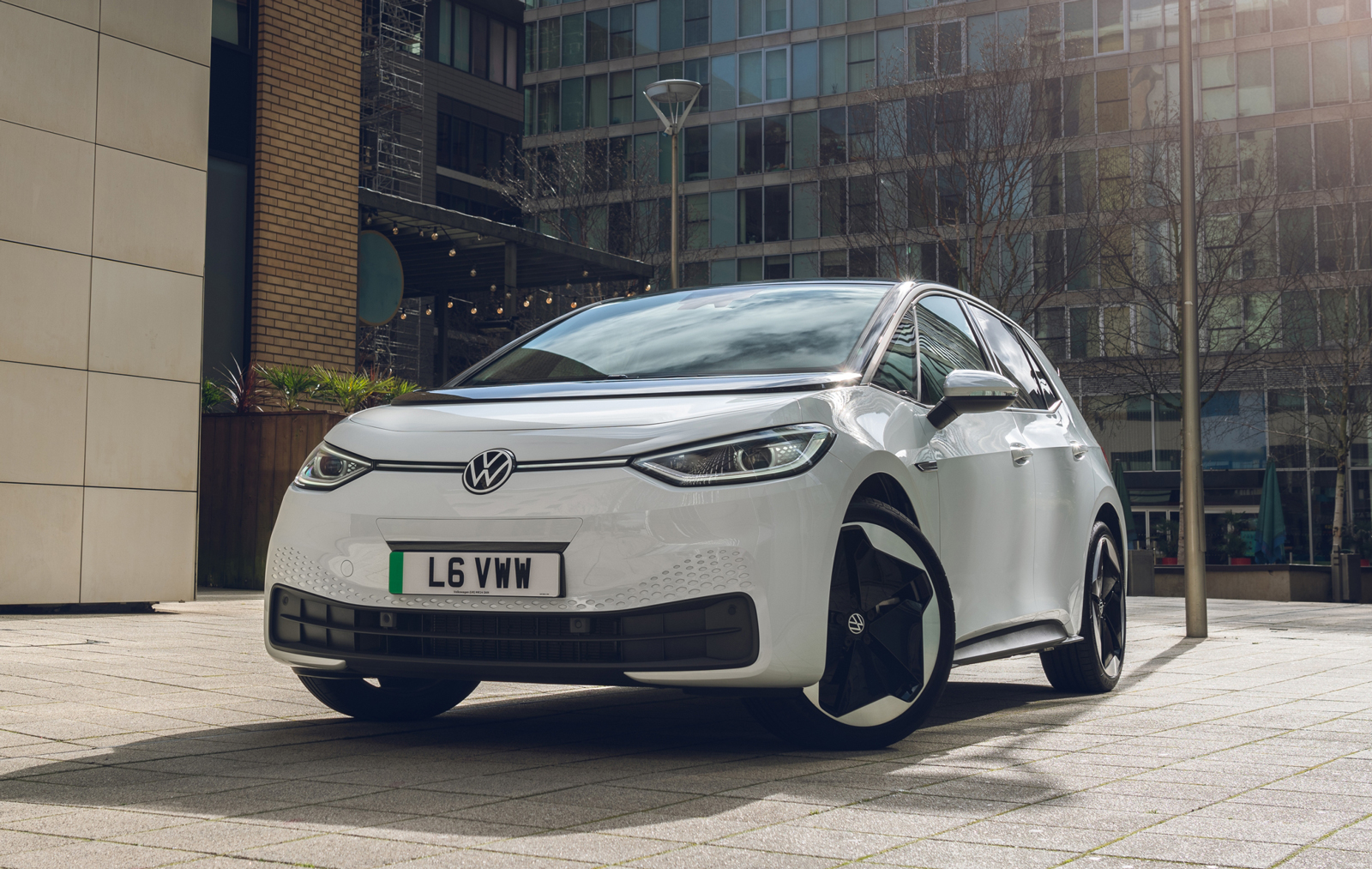 It’s taken a while, but Volkswagen is finally getting serious about electric cars, and the ID.3 is its first effort.  And what an effort. The Tour model is the one to choose if you want to go a long way, and you’ll certainly enjoy the experience. The ID.3 is nippy off the line, and unlike many of its contemporaries, it’s actually quite enjoyable when the road turns twisty. Better still, it’s nippy and nimble precisely where you need it to be, and that remains true for the lower-grade, lower claimed range ID.3 that Volkswagen builds, too.

It’s also decently spacious inside for five people and luggage, and has a decent amount of standard equipment. Only a slightly fiddly infotainment system lets the side down a bit, but not by much. 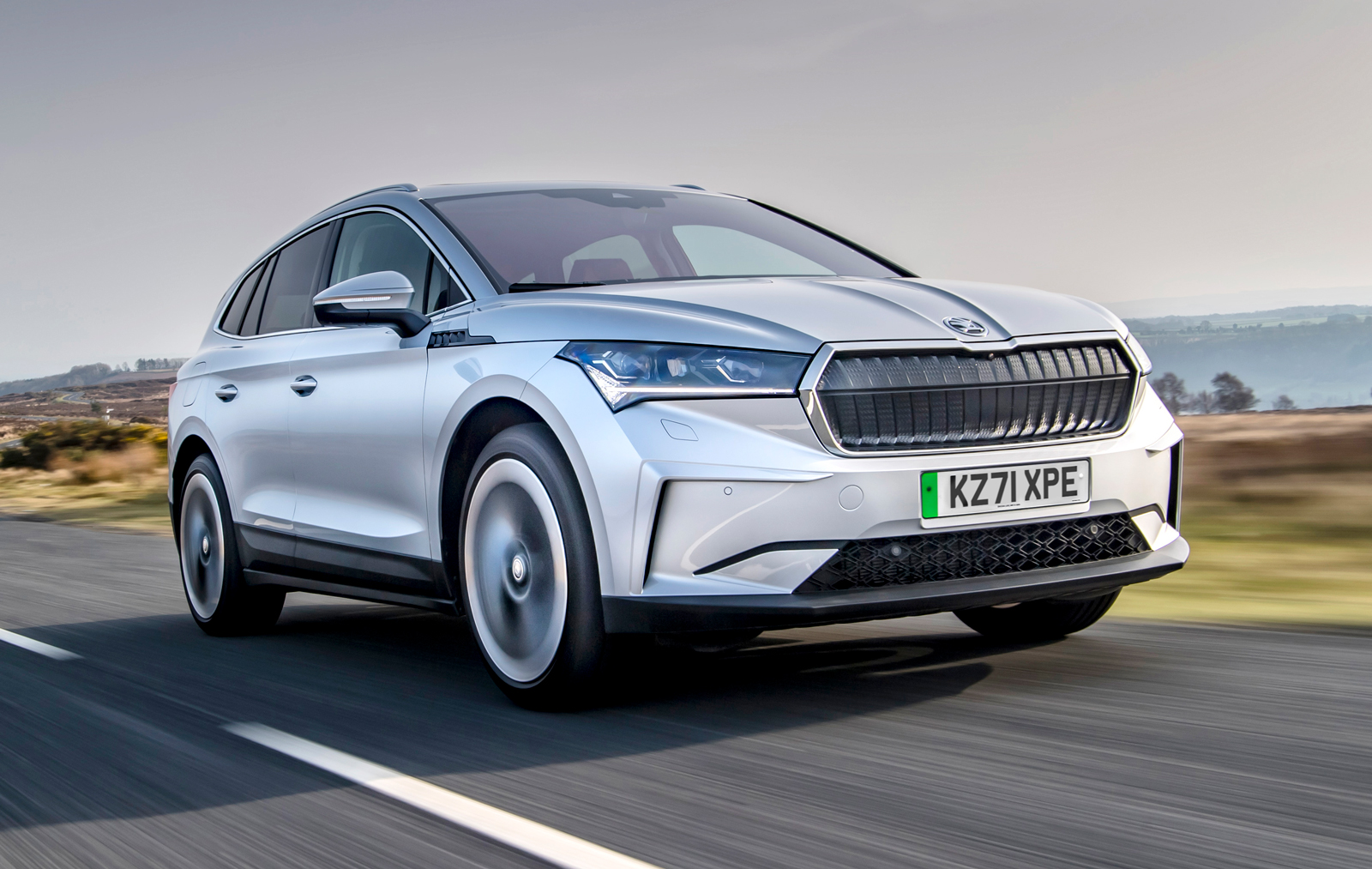 The Skoda Enyaq is an electric car that really could suit almost everyone. Why? Well, it’s big and roomy inside, so it easily has the family side of life sorted. It’s enormous in the back, like a limousine with a lofty viewpoint, and the boot’s almost big enough to sleep in.

It’s good to drive, too, with a range of powertrains that offer perfectly acceptable performance and an ability to recharge at a reasonably brisk rate. It’ll be the 80 model that you need if you regularly travel a decent distance, because a claimed range of 333 miles means you’re likely to need a comfort stop long before the Enyaq runs out of electricity - even with a real-world reduction in the car's mileage. 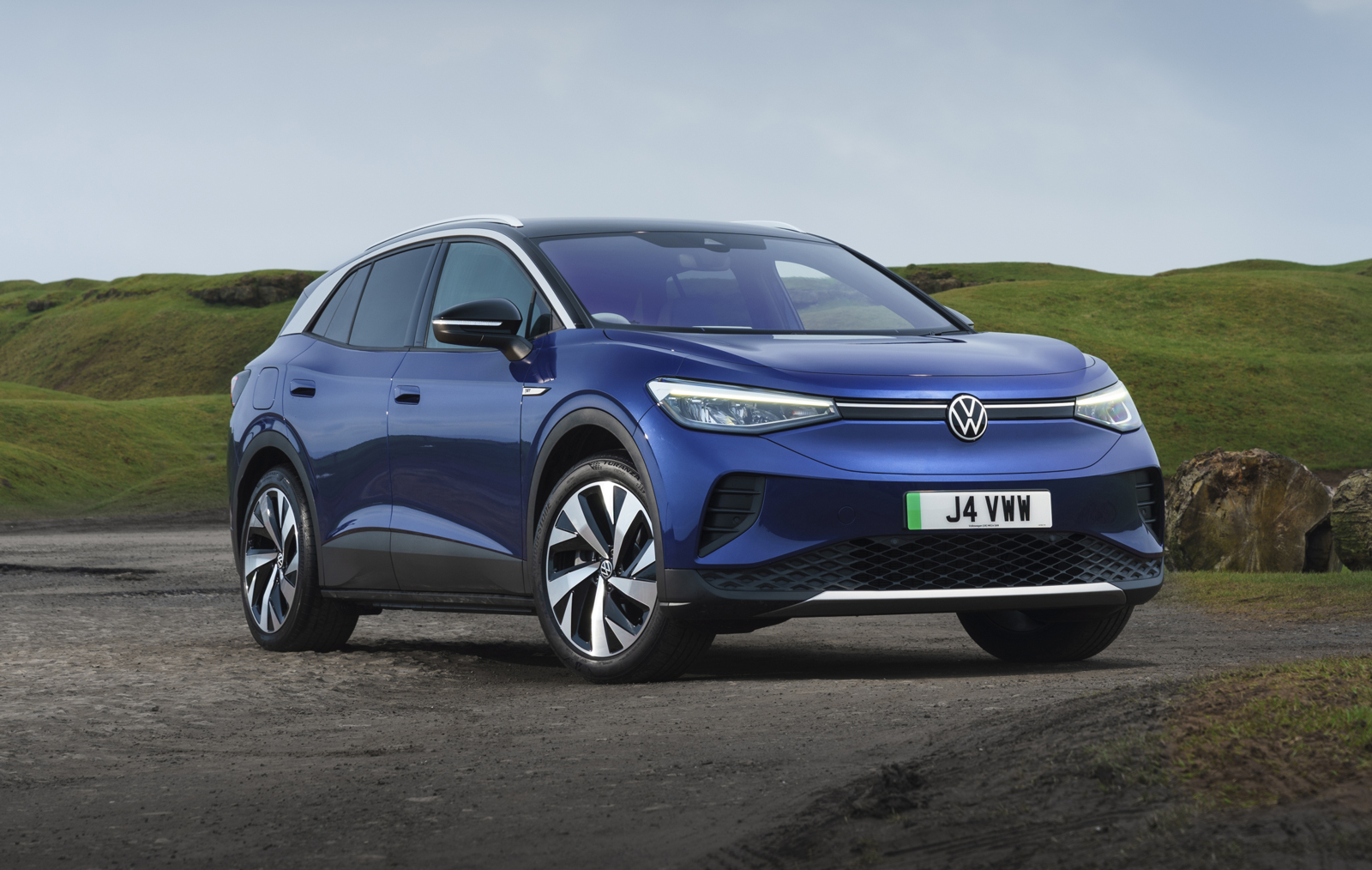 People are flocking to electric cars. People are flocking to SUVs. So, Volkswagen has seen that money is there to be made with an electrically powered SUV, and the ID.4 is that car. There are a couple of battery options available, but you’ll need the Pro Performance one if you have long-distance motoring in mind.

Acceleration is sprightly instead of searing (there’s a GTX model for that), while the standard-fit adaptive suspension makes the ride decently comfortable while keeping body movements firmly in check. The interior is suitably roomy but while the rear seats fold flat they don’t slide back and forward, should you need to alter boot space or rear legroom. 310 miles of claimed range also leaves enough space for a still-handy real-world ability. 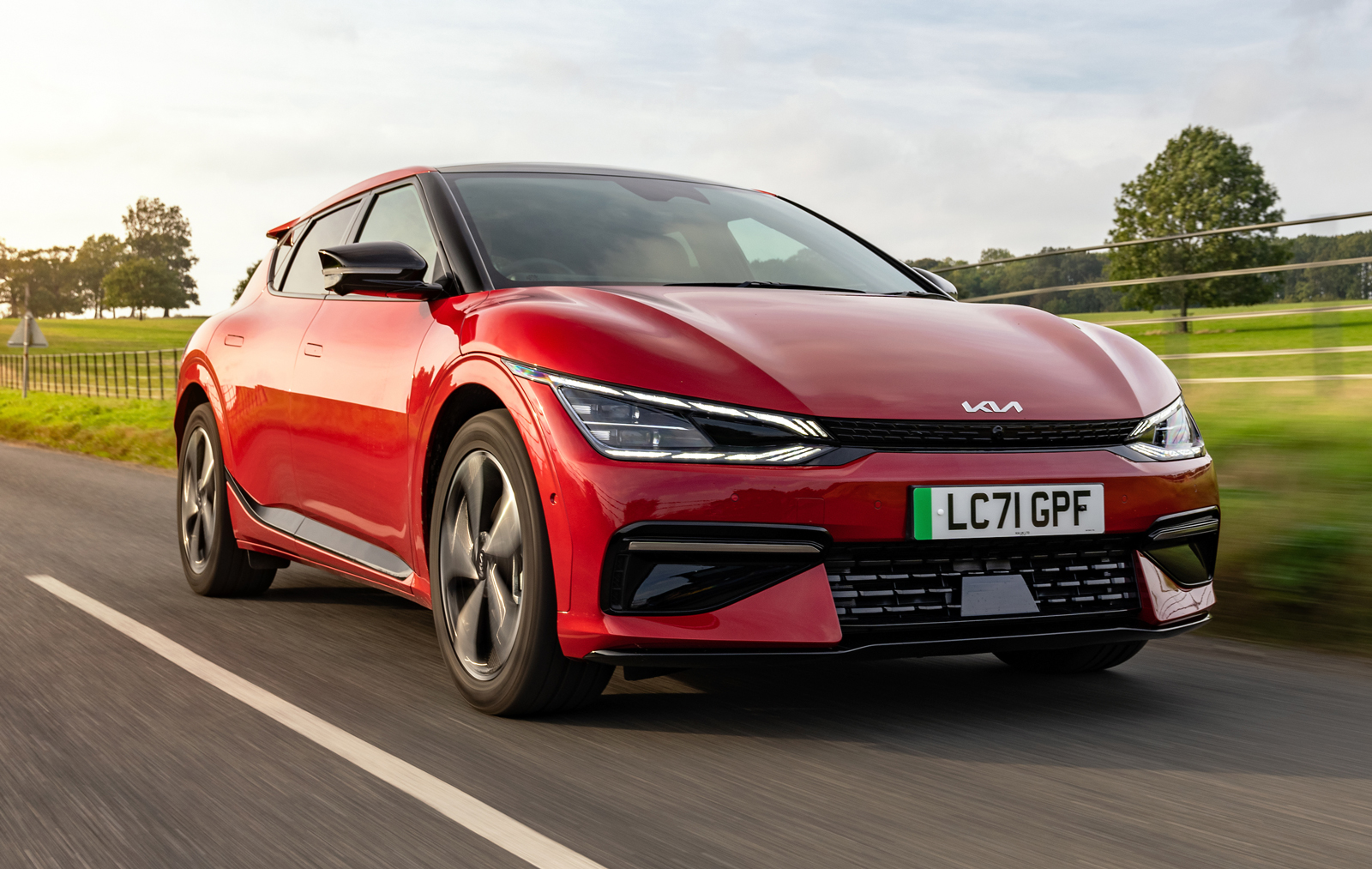 It’s a car that is entirely inoffensive to drive, but this also makes it slightly unmemorable (which is the case with many normal EVs). Still, it gets off the line briskly and won’t jiggle your around too much on bumpy roads. Inside, the EV6 looks truly contemporary with a sleek, modern design and high-quality materials, and it has the sort of tech that makes every journey more enjoyable as well as safer. 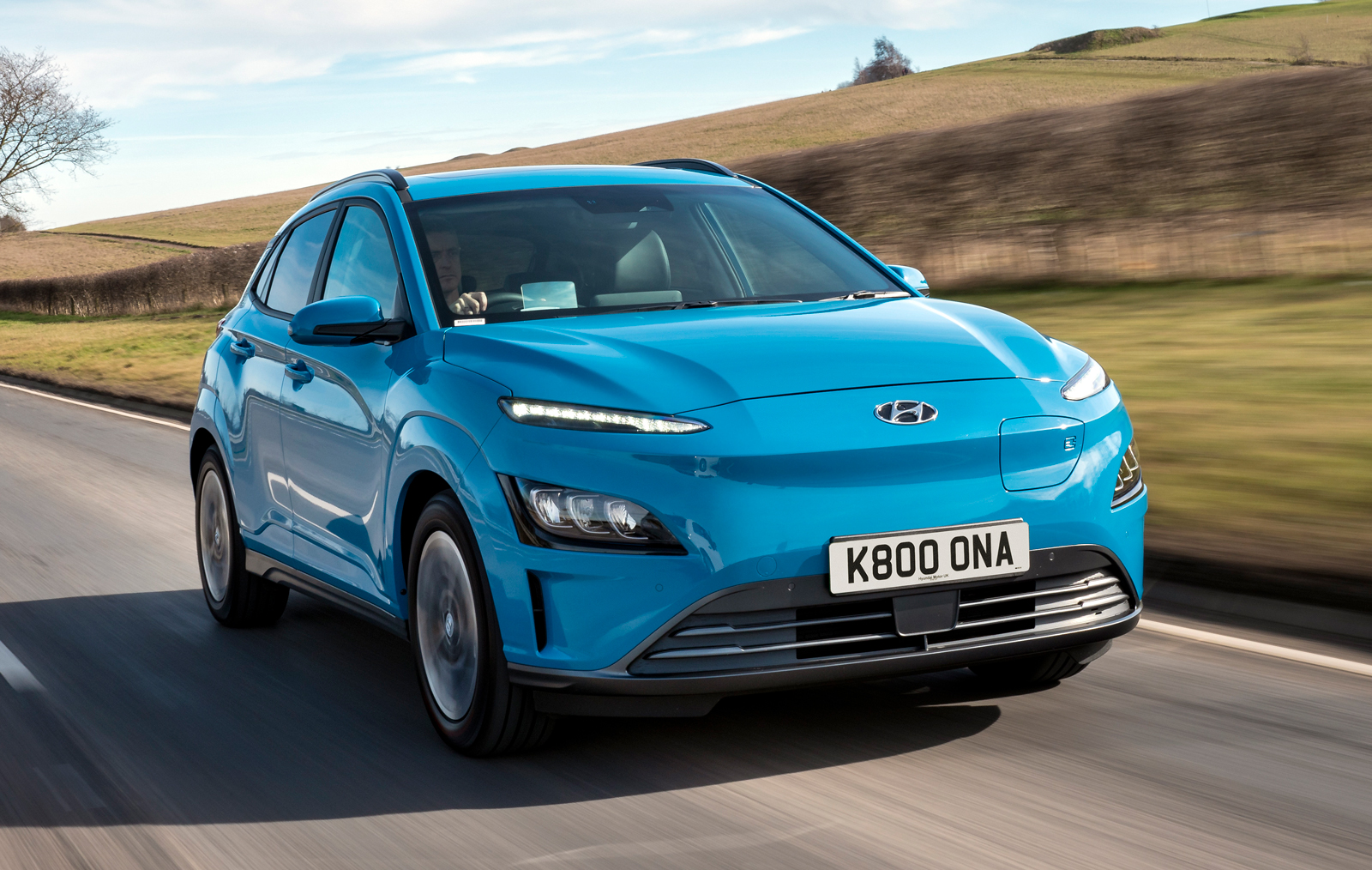 The Hyundai Kona Electric might be one of the more unusual-looking electric SUVs. People seem to love it, and the popularity looks set to continue following the car’s facelift earlier this year. There’ an entry-level model that can do an official 189 miles. That’s not what we’re interested in here. Nope. If you have a long way to go (but not necessarily a short time to get there), the version with the 64kWh and 201hp electric motor is the one to choose, because it has a claimed range of 300 miles. Shave off a few percent of real-world and you're still left with plenty of miles for most daily duties.

The Hyundai Ioniq 5 certainly grabs the attention, doesn’t it? It looks like nothing else, with its large square-ish shape and ‘pixelated’ lighting signature. And best of all, it’s a cracking electric option.

The rear-wheel-drive single-motor option with the 73kWh battery is the perfect choice is you regularly undertake longer journeys because it has a claimed range of 300 miles. Better still, it can be charged at a rate of 350kW (although such chargers are rare), so you won’t be stationary for too long, even if you knock a few miles off that official stat.

The interior is large and dominated by a twin-screen dashboard that manages to look both retro and cutting-edge at the same time. There’s loads of space, too. Ioniq? It could end up being iconic.