The Toyota GT86 is a thoroughly modern sports coupe, with some very traditional values at its core. So, while other car makers chase more power, grip and tech, Toyota reckons all you need is ‘enough’ power and a low enough level of grip to make it fun. Oh, and rear-wheel-drive. Old school and, as we’ll see, old’s cool.

One look at the Toyota GT86 tells you it’s a coupe with a time-honoured style. It’s long and low with a hatchback rear end. Think of it as a Ford Capri for today and you’ll be getting close.

The front end is dominated by a huge inset grille that resembles an unhappy mouth. This is flanked by a couple of panels housing the fog lights, above which are a pair of ‘frowning’ headlights.

The bonnet is pretty long and leads back to a steeply raked windscreen. Each front wing features a vent at the rear end of its top edge.

The cockpit itself has a small side glass profile, although the doors are predictably long, leading back over a couple of pronounced haunches to a smallish boot opening. Below this sits a heavily sculpted bumper that plays host to a couple of large exhaust pipes.

It’s an absolute giggle to drive, as long as you’re prepared to work it hard. The 2.0-litre engine takes a while to get going from low revs. So long as you keep it spinning quickly, it gives the GT86 a decent turn of pace. Remember, Toyota focused on giving the car enough pace, not too much.

The suspension is firm, so you’ll feel a lot of what’s happening underneath. When you’re on a twisty road that’s precisely what increases the fun factor. Better still, the steering is neither too light nor too heavy, and the car responds quickly to inputs.

That rear-drive layout is also a hoot and allows you to feel exactly how much grip the rear wheels have as you’re accelerating, which is fun. It’s just as well you’ll want to take the long way home though, because the GT86 is less at home on the motorway, where it can be a bit too noisy for comfort. 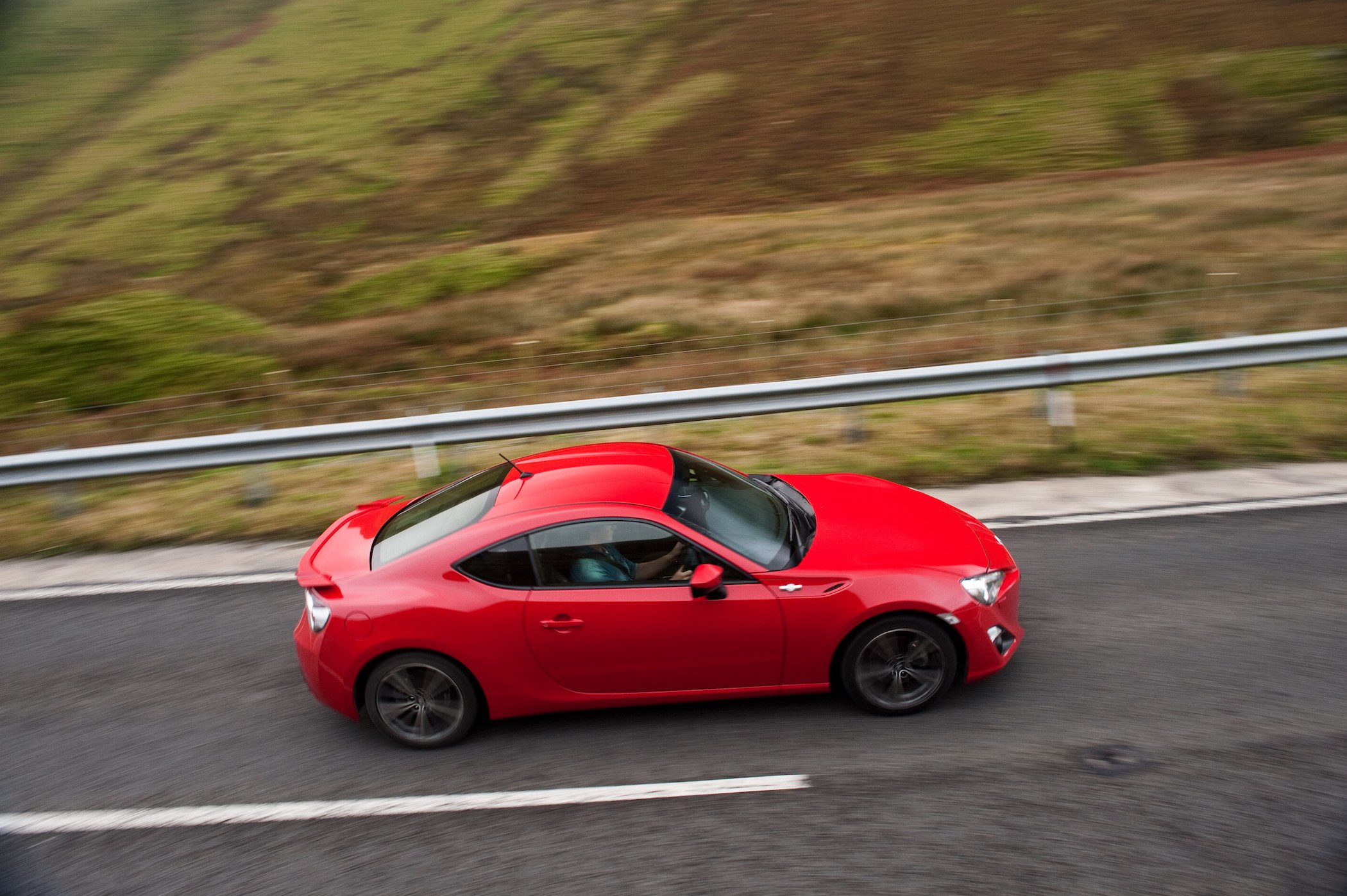 It’s an absolute giggle to drive, as long as you’re prepared to work it hard.

The inside of the Toyota GT86 is simple. And it’s deliberately so, to allow you to focus on the process of driving and to get the maximum enjoyment from it.

The door trims feature the controls for the electric windows and electrically operated door mirrors, and the door pull is comparatively far forward to make reaching it easy when the door is fully open. The steering wheel is round (no flat bottoms here) and has buttons for the audio system and cruise control, and that’s it. Simplicity at work again.

Ahead of the driver is a 3-dial display, with the rev-counter front and centre. This also contains a small digital speed display, to supplement the analogue speedometer to the left of the rev-counter. The right hand of the dials shows supplementary information, such as economy, average speed, and whether or not a door is open. 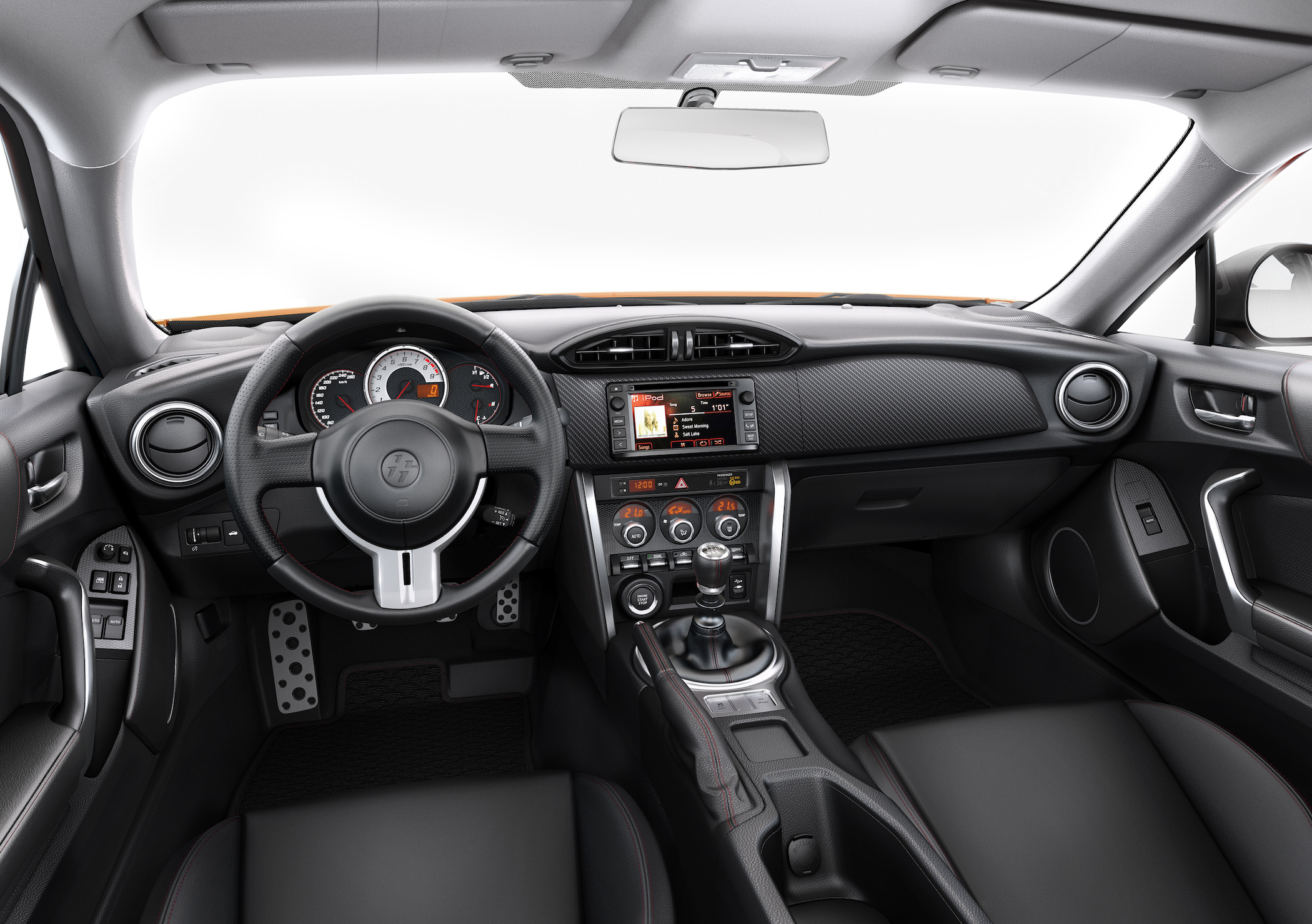 The centre of the dashboard features Toyota’s touchscreen infotainment system, and below this there’s a small digital clock that looks like it’s been lifted straight from 1983.

Three rotating knobs and digital displays, plus a row of switches beneath, control the climate system. And finally there’s a large button to start and stop the engine. The gear lever is in just the right place for snappy shifts, and the handbrake is a conventional lever (again, no fancy electric parking brakes here).

The seats are trimmed in cloth and (in some versions) Alcantara, which feels very classy indeed, and all the plastics feel like they’ll deal with many years of enthusiastic use.

You don’t tend to buy a sports coupe expecting the ultimate in practicality, but the Toyota GT86 actually isn’t bad – for a couple of people at least.

It has loads of space around the front seats, which are set pretty low in the cabin. There’s also lots of adjustability for the seats and steering wheel. You should be able to make it fit around you, no matter your personal dimensions.

The boot is a good size too, and more than capable of carrying plenty of shopping. The back seats also fold down to let you extend the boot area, although the boot opening itself is a little small. Talking of small, that’s the only size of person who’ll fit in the rear seats. And even then, they might have to remove their head first. And their feet. It’s pretty tiny and is probably best viewed as extra luggage space.

A naturally aspirated 2.0-litre engine that’s designed to be revved is not going to be as economical as the turbocharged motors in rivals. Nevertheless, the Toyota GT86 could manage an official average economy of 36.2mpg with the standard 6-speed manual gearbox, and 39.8mpg with the optional automatic fitted.

The Toyota GT86 has never been crash-tested by Euro NCAP. It still has plenty of safety kit, including stability control, 7 airbags and anti-whiplash head restraints. This all helps to keep down insurance costs, so the GT86 starts off in a middling group 30, rising to group 35.

Toyota has a reliability record rivals should envy, so the GT86 should give you few worries. However, given that earlier cars will be out of warranty, we would recommend you consider cinchCare

The Toyota GT86 is a pretty rare beast indeed, because it’s a sports coupe that has driving enjoyment, and not out-and-out speed, as its ethos. It’s a car designed to be enjoyed at normal speeds and is truly fulfilling to drive along a twisty road.

Better still, it’s also a car that will fit into your daily life without issue (as long as you don’t have a big family), and it will take the humdrum in its stride. Add in the facts that it won’t cost much to run, and should be safe and reliable, and it makes a top choice.

There are few finer coupes than the Toyota GT86. It’s precisely the facts that it isn’t terribly quick and tenaciously grippy that make it so much more fun and usable. It truly is a coupe for the modern era. It looks fabulous, and is even decently practical and safe.