The Ford Mondeo is a car designed to take you from one end of the country to the other without breaking sweat. It always has been, and the current-shape car and its immediate predecessor are easily the best at this yet. Not only that, it’s also decent fun to drive.

The Ford Mondeo looks like a car designed with long distances in mind. It’s long, low, aerodynamic and it looks comfortable – in fact, there are few cars better aimed at potential buyers because the Mondeo is set up to appeal to business drivers who do intergalactic mileages during the week, and then like to have fun with the family at weekends.

The current car’s styling is an evolution of the third-generation Mondeo. Given the Mk3 car was a bit of a looker, it made sense for Ford to simply update its style as a way to make the current car look contemporary while keeping the Mondeo’s traditional values intact.

So the Mondeo sports narrow headlights, a wide grille and a sleek-looking cabin profile that manages to convey a feeling of spaciousness. 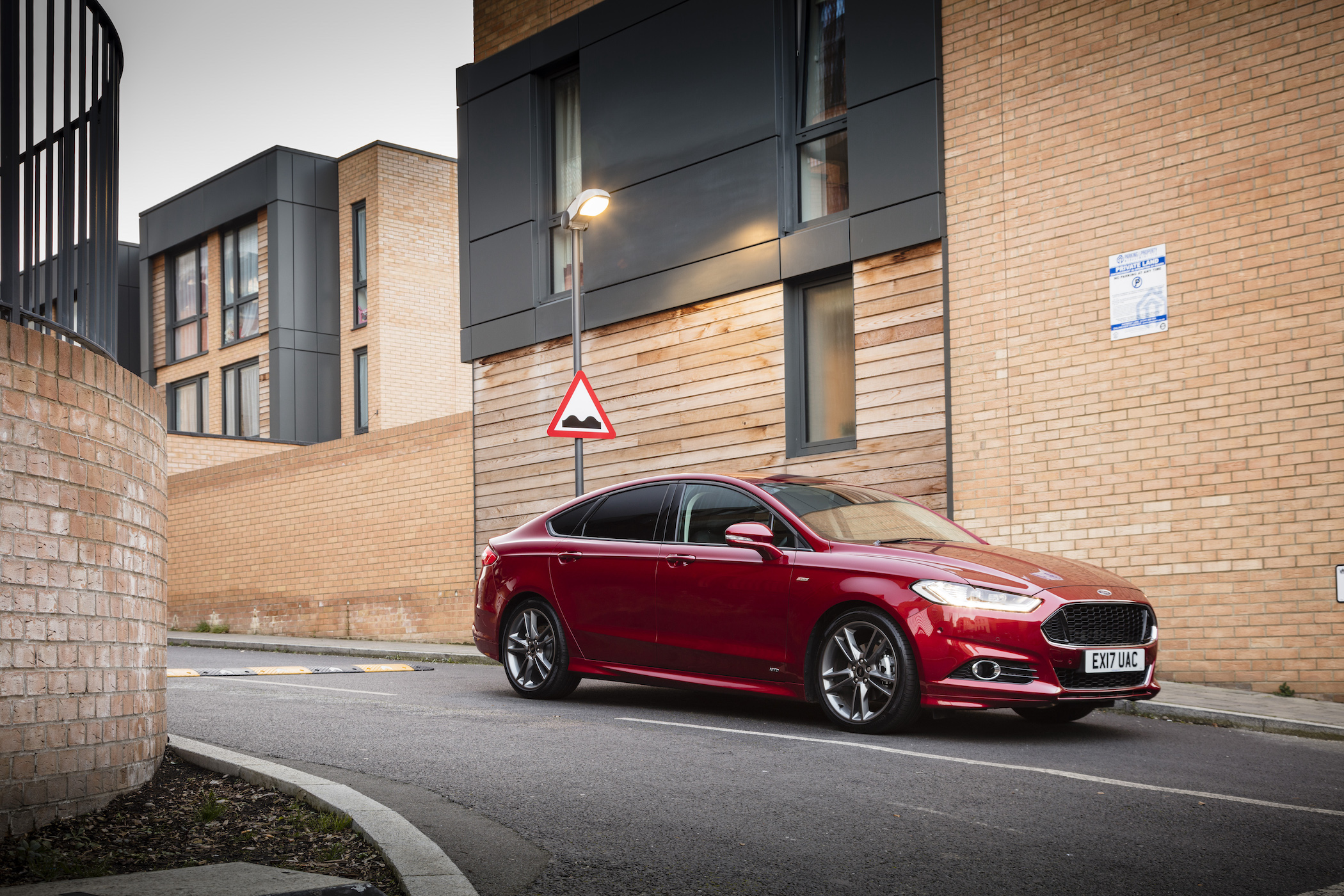 As you’d expect from a car aimed at business drivers who frequently have travel long distances, the Mondeo is tremendous on the motorway. No matter which engine is under the bonnet, it absolutely chomps through miles and you’ll get to the far end of your journey feeling pretty much as fresh as when you opened the car to get into it.

You might expect such a comfortable long-distance machine to feel out of its depth on twisty backroad. It’s nothing of the sort. The Mondeo steers well, feels genuinely nimble and is a lot more sporting than it looks.

Only in town do you become aware of the Mondeo’s size, as it can feel quite large in tight car parks. Still, the parking sensors take the worry out of such moments. 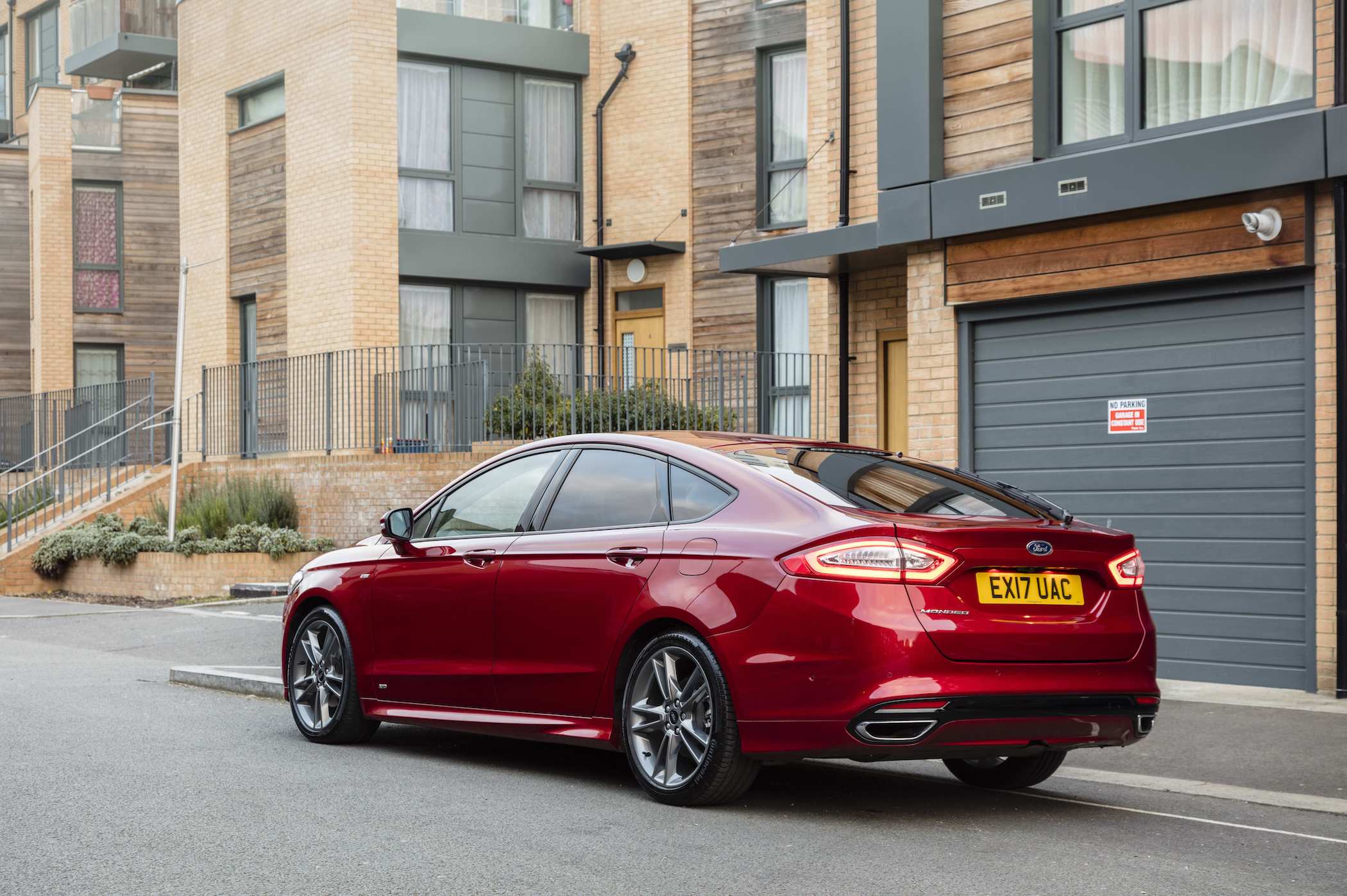 You’ll get to the far end of your journey feeling pretty much as fresh as when you opened the car to get into it.

With its large central console and high window line, the Ford Mondeo’s interior feels like it almost wraps itself around you, giving you the impression you’re actually in a cockpit.

The seats are also large and comfortable, and although you’ll have to move them manually on entry-level cars, they’re extremely supportive. Moving up the trims brings electrical adjustment and sports seats, which are even more supportive on long trips and twisty roads.

The dashboard itself is clear and easy to understand, with all the controls laid out in a logical manner. Though it would be easier to adjust the cabin temperature by twisting a knob instead of repeatedly having to press a button.

The materials used inside feel designed to last well, if not as luxurious as some, such as the Honda Accord or Mazda 6. The good news is that rattles and squeaks will be largely absent, and the Mondeo will bear the brunt of a busy family’s life without much trouble.

As you move up the range to ST Line and even top-spec Vignale models, some of the surfaces on the seats, steering wheel, handbrake and gear lever are swathed in leather, which increases the feel good factor quite considerably.

Even entry-level cars come with an 8-inch touchscreen infotainment system that can mirror your smartphone using either Apple CarPlay or Android Auto, as well as dual-zone climate control, cruise control and parking sensors at either end. Vignale versions get a 12-speaker Sony audio system as standard. 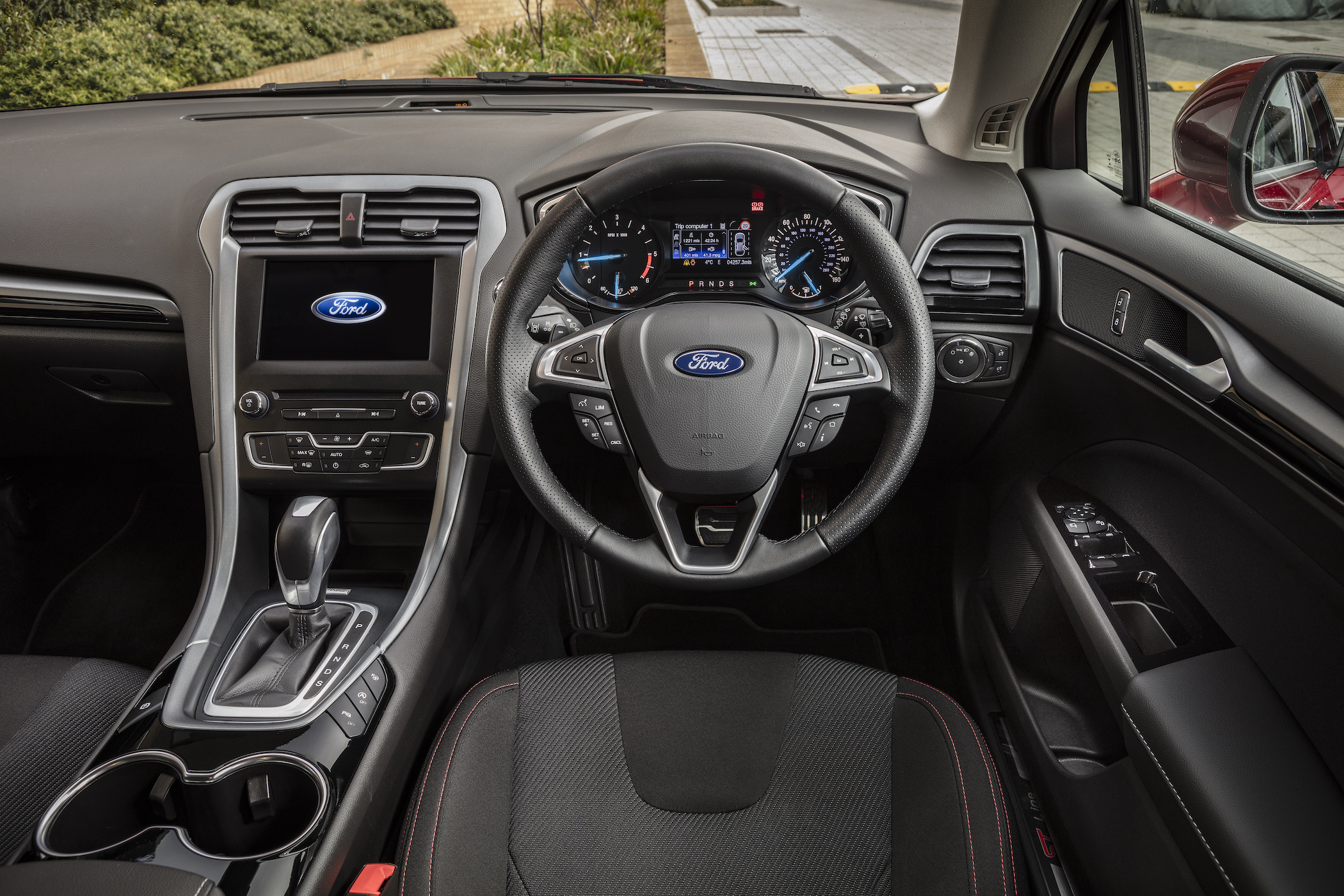 The Mondeo has this area well and truly covered. For a start, the two occupants up front get loads of space to stretch out in, and then there’s room behind them for three adults to feel perfectly fine. It’s a family car that that actually fits a family.

Add in the fact that the boot is massive and you’d have to say that the Mondeo has it all well sussed.

The Mondeo’s boot is accessed through a huge hatchback (unless you choose the hybrid model, which has less space and is a saloon only). The seats are easy to fold down, and you can use the central ski hatch if you need to transport longer items and rear passengers at the same time.

If you want something that can get close to the space the Mondeo offers, you’ll need to look at a Skoda Superb, which is almost big enough to have a game of 5-a-side in, or a Vauxhall Insignia. 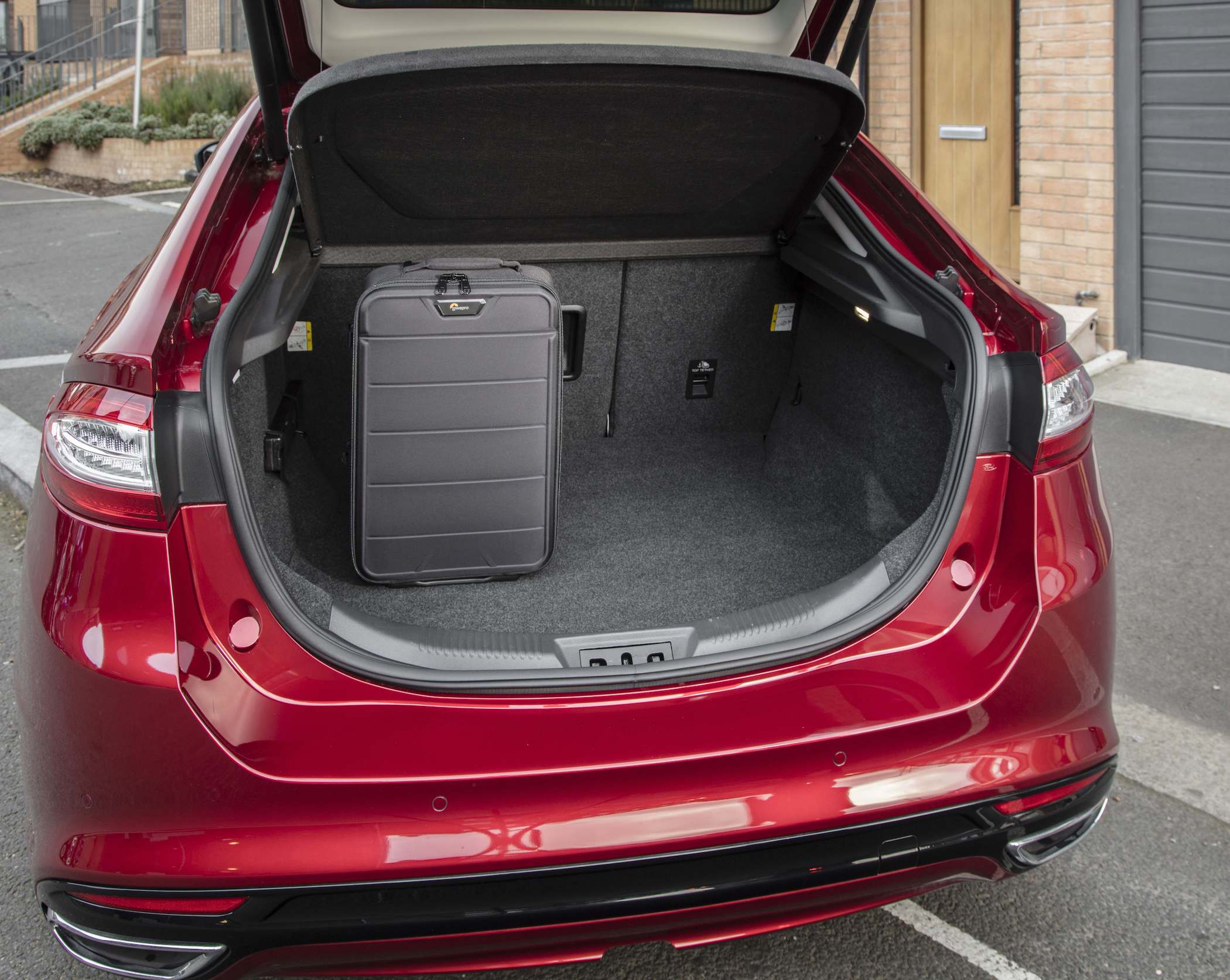 Given the Mondeo is a car designed for long trips, it makes sense to go for the 2.0-litre diesel engine. You should manage an average economy figure around the 60mpg mark. Not to be sniffed at.

If you don’t do the mileage or simply can’t stomach the thought of a diesel, the 1.5-litre turbocharged petrol engine is a sweet option. It gives the Mondeo a decent spring in its step and won’t break the bank in fuel costs.

Servicing costs are perfectly reasonable and helped by the fact there’s a Ford dealer on most street corners. Insurance is also reasonable, starting from group 15 and topping out at group 31.

The Ford Mondeo is so much more than just the sum of its parts - it really will cope easily with pretty much every situation a family can throw at it. It’s pretty cavernous inside, so can take adults, teenagers, children in child seats and the odd pet without any trouble - and it’ll carry all their stuff. It’ll do all this without inflicting much pain on your bank account, too.

Add in the fact that the Mondeo achieved the full 5 stars when tested by crash test experts Euro NCAP and you can see it has pretty much every base covered.

What else to consider? Ford Mondeo alternatvies

The traditional family hatchback market may be smaller than it used to be but there are still some extremely competent options out there:

The Ford Mondeo really is all things to all drivers because it takes long distances in its stride, it can carry everything you need it to, and has all the luxury kit to make you feel good about life. And better still, it’s genuinely good fun to drive when the mood takes you and a twisty road beckons.