The BMW 4 Series range consists of the 2-door Convertible, 2-door Coupe and 5-door Gran Coupe. Think of it as a sleeker, more stylish version of the BMW 3Series it’s based on– which also means it’s superb to drive. The 4 Series is for those who like the 3 Series and everything it offers- and are looking for something with more kerb appeal.

The BMW 4 Series sprang into life when the 3 Series Coupe and Convertible were rebadged, and the Gran Coupe followed soon after. The latter is a bit of a mash-up – it’s technically a coupe with 4 side doors (there’s no pillar between the front and rear doors) and a hatchback-style boot.

All versions feature sleek bodywork, large alloy wheels and a purposeful face that get the sporty message across. The Coupe, though, in our opinion has the most stylish body shape.

The 4 Series was facelifted in 2017. This was very much an ‘if it isn’t broken, don’t fix it’ thing, with only minor tweaks being made to the lights, bumpers, suspension and entertainment system. 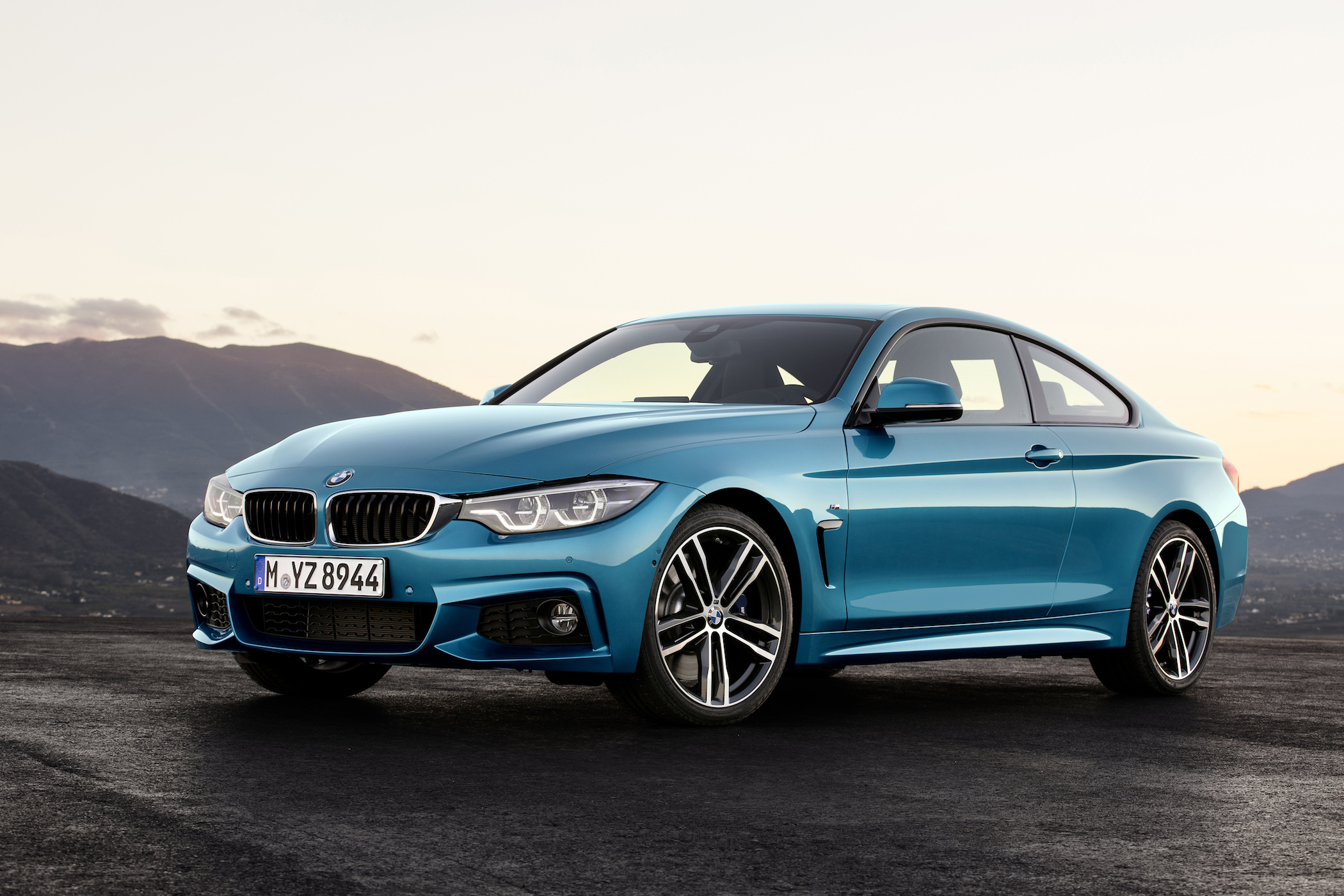 The Coupe in our opinion has the most stylish body shape.

Every version of the BMW 4 Series is great to drive. The ride is firm, especially with M Sport trim and every engine has plenty of power. On larger alloy wheels, the body is well controlled, the steering is nice and accurate.

This is the sort of car that’s as much at home on a curvy country road as it is on the motorway - fun to drive when you need it to be, and also great at munching through a couple of hundred miles in the outside lane of the M1. Most examples tend to be rear-wheel-drive, with those badged as ‘xDrive’ all-wheel drive.

As well as being powerful, the diesel engines are economical. The turbocharged petrols offer even more shove and top out in M4 guise (with 0-62mph being covered in 4.1 seconds), although that version is just available with the Coupe and Cabriolet. 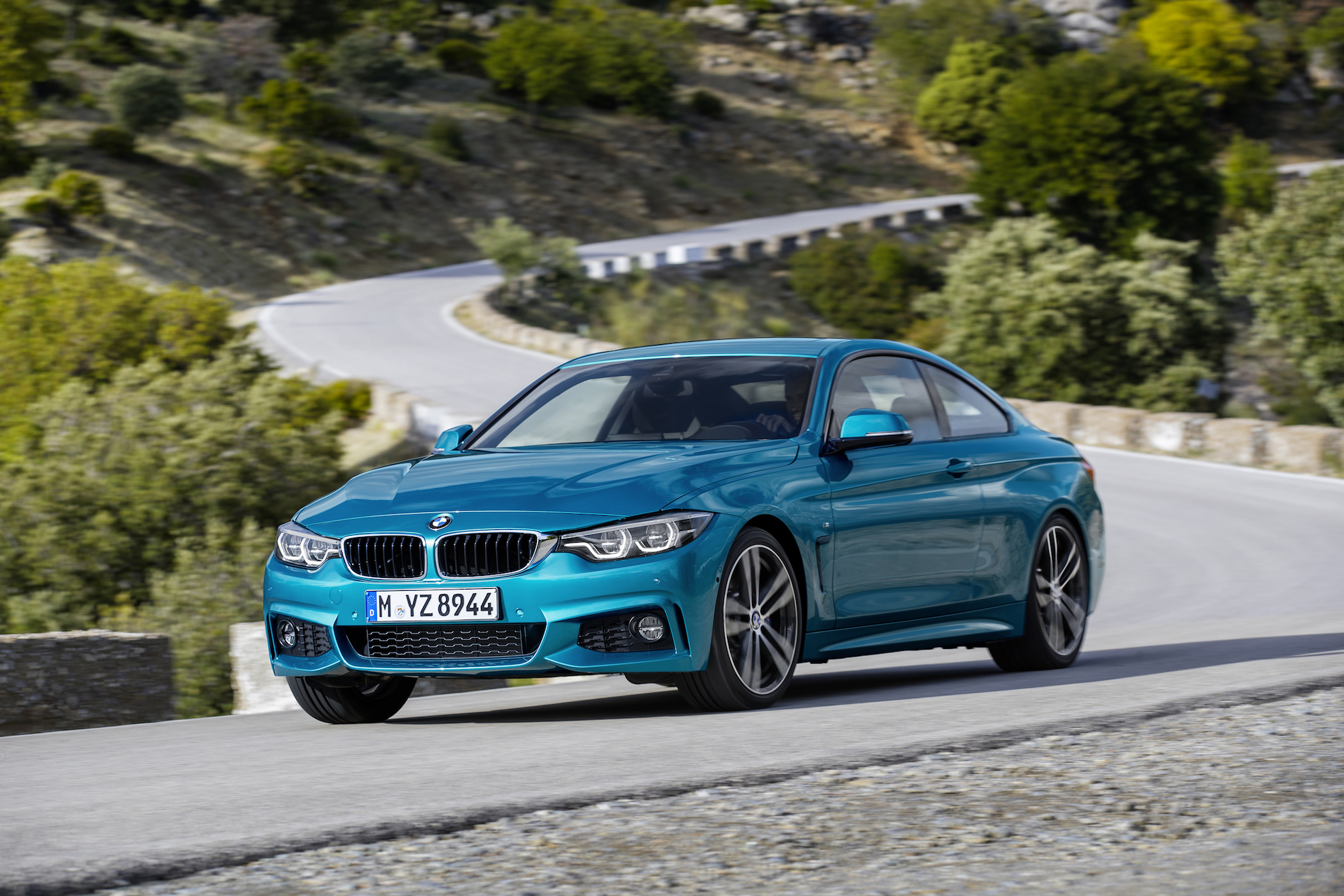 Every version of the BMW 4 Series is great to drive.

Settle into the leather driver’s seat and it won’t take you long to get comfortable, thanks to a range of manual or electric seat adjustments. The seat has memory settings that are useful if you share the driving with someone else.

There’s plenty of quality leather and metal throughout the interior, although it’s not quite up to the standard of the Audi A5 Sportback, and the dashboard design is virtually identical to the 3 Series’. There’s a screen mounted on top of the dash that’s controlled by a dial and buttons between the front seats, below which are buttons for the audio system and the ventilation. Analogue dials sit in front of the driver as standard.

Front seat space is the same for all body styles - you sit low (this is a car with sporty pretensions after all), and there’s room for all to spread out. The rear seats are tightest in the Cabriolet, where there’s room for only 2 and the seat backs are fairly upright. The Coupe can also take only a couple in the rear, although things are more comfortable. The Gran Coupe can accommodate 3 at a pinch and the rear doors mean you won’t have to clamber into those seats with all the grace of an elephant.

The 4 Series’ iDrive entertainment system remains one of the best around. Its menu system is intuitive and easier to operate via the dial than a touchscreen when on the move. As standard (base trim was SE on earlier cars and Sport later on), you get sat-nav, Bluetooth, climate control, auto lights and wipers and cruise control – while a head-up display that shows your speed and the sat-nav on the windscreen, an upgraded sound system and a reversing camera are optional. 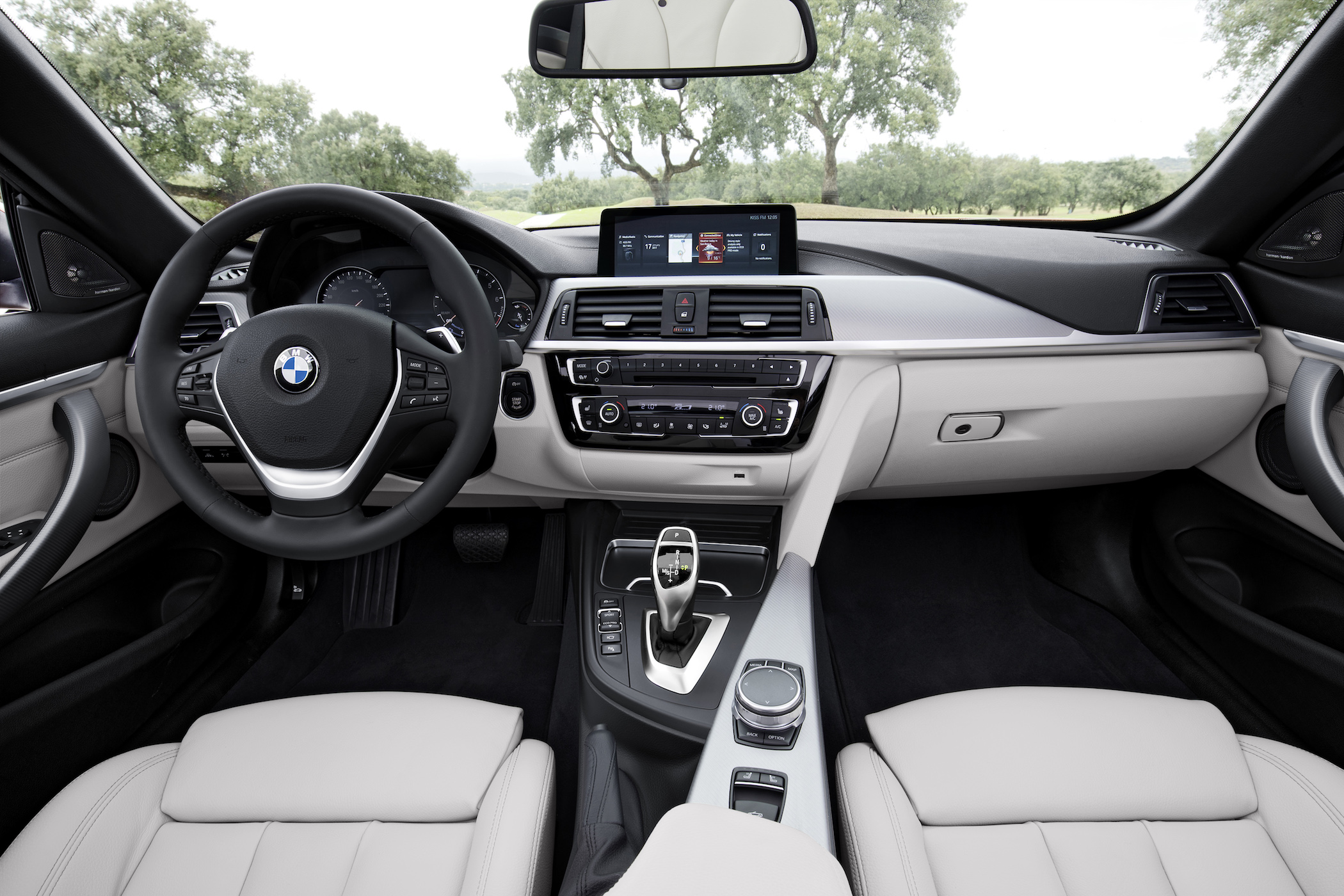 The BMW 4 Series offers a variety of cubby holes for your odds and ends up front. The door bins, glovebox and cubby beneath the front arm rest aren’t that large. At least there’s room for a couple of skinny lattes or a pack of toffees.

There’s not a lot of storage on offer in the rear seats, other than nets on the back of the front seats, although the Cabriolet and Coupe have some trays where the centre rear passenger would otherwise be.

As you’d expect, the Cabriolet’s boot is the tightest. It’s still got room for a mid-week shop with the roof up. There’s less room with it folded. At least there’s a floor net to hold everything in place. The Coupe’s boot has room for a suitcase and a couple of squashy bags. It’s a bit shallow and the small boot opening may stop you loading bulky objects. The Gran Coupe’s electrically powered hatchback presents no such problems, with a well-shaped boot big enough for a few cases. The rear seatbacks can be folded on all 3 body styles.

Most of the petrol engines average between 34.0mpg and 38.2mpg, officially, while the M4’s twin-turbo engine is rated at up to 28.5mpg. Then again, you’re probably not buying an M4 expecting great fuel efficiency.

We love the combination of flair and practicality offered across thetrio ofbody stylesin4 Series. The natural limits on boot space make it a less obvious choice for growing families. Commuters and parents with older children should still find plenty to enjoy thanks to the smooth interiors.

What else to consider?

Stylish alternatives to the 4 Series range are plentiful, although none are quite as good to drive:

The BMW 4 Series has something for everyone, be they wind-in-the-hair fans, coupe lovers or simply those who need a more practical executive car. Throw in powerful yet economical engines, brilliant handling and a raft of safety kit, and you can see why this one’s a winner.