Audi got in on the SUV action right at the start, when it launched the original Q7 way back in 2006. By the time the second-generation car came along in 2015, it was starting to feel a little long in the tooth and in need of a major upgrade. Which is what it got. The newest versions are a huge step forward for families who need to carry 7 people in luxury, and still feels classy. 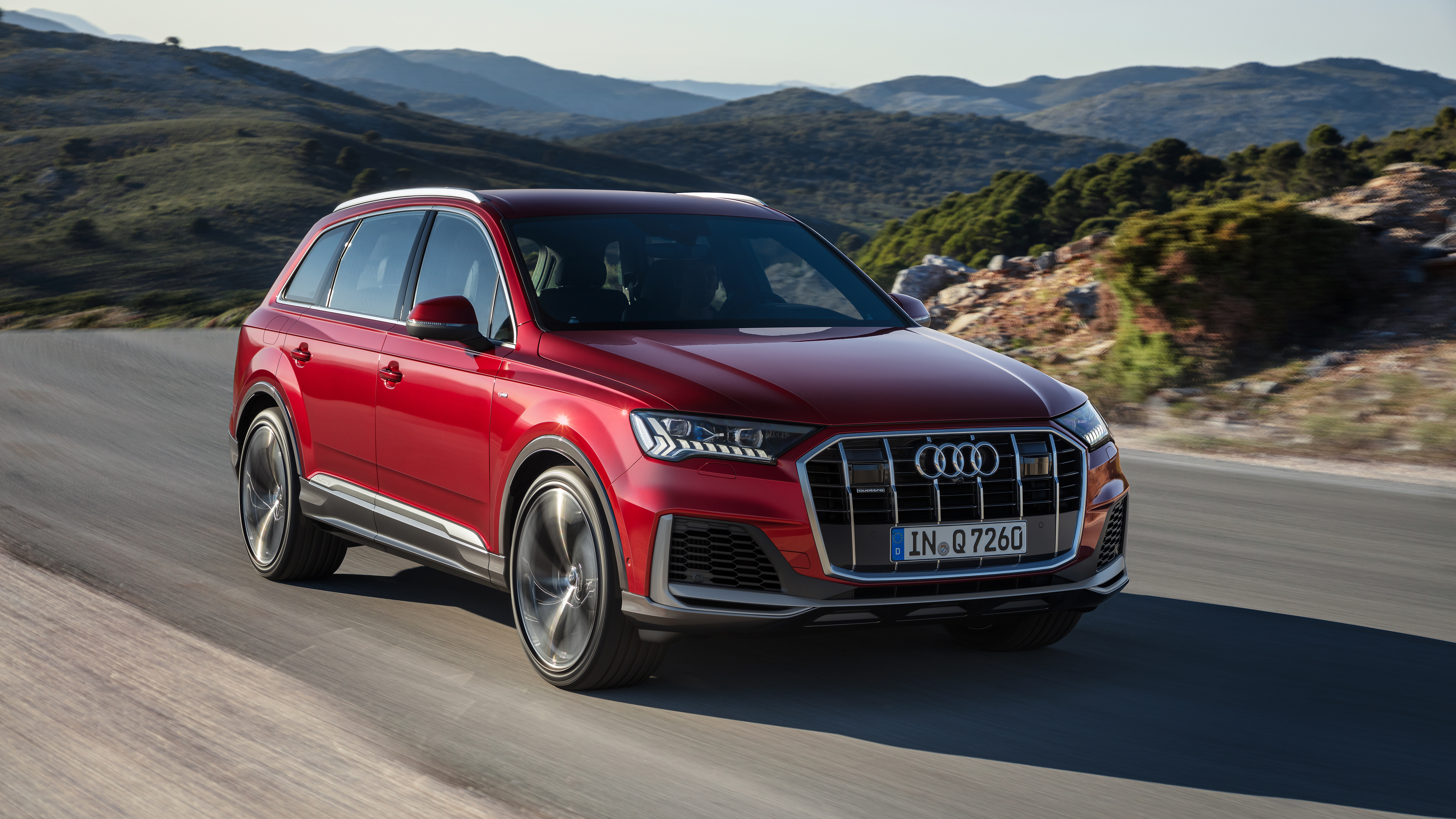 ‘Imposing’ is one way to describe the Audi Q7. ‘Big enough to generate gravity’ might be another. The Audi Q7 takes up quite a bit of your postcode. The good news is it manages to do this without looking too large.

You’re certainly never in any doubt what sort of car is coming up behind you when it’s an Audi Q7 - that front grille is enormous. The Audi badge itself is huge, too, just to emphasise the point. The front bumper has vents big enough to hide in, and the wide-apart headlights have distinctive LED daytime running light signatures.

The lower-spec models have 19-inch alloy wheels as standard, which look quite small in the wheel arches, so many first owners will have upgraded these to 20-inch or even 22-inch.

As you walk down the sides of the Q7 (which are long enough that you might even wear out your shoes), you’ll see that the huge upright doors offer almost unhindered access to the cabin. At the back, the tailgate takes up pretty much the whole rear end, so makes getting stuff into and out of the boot extremely easy indeed. 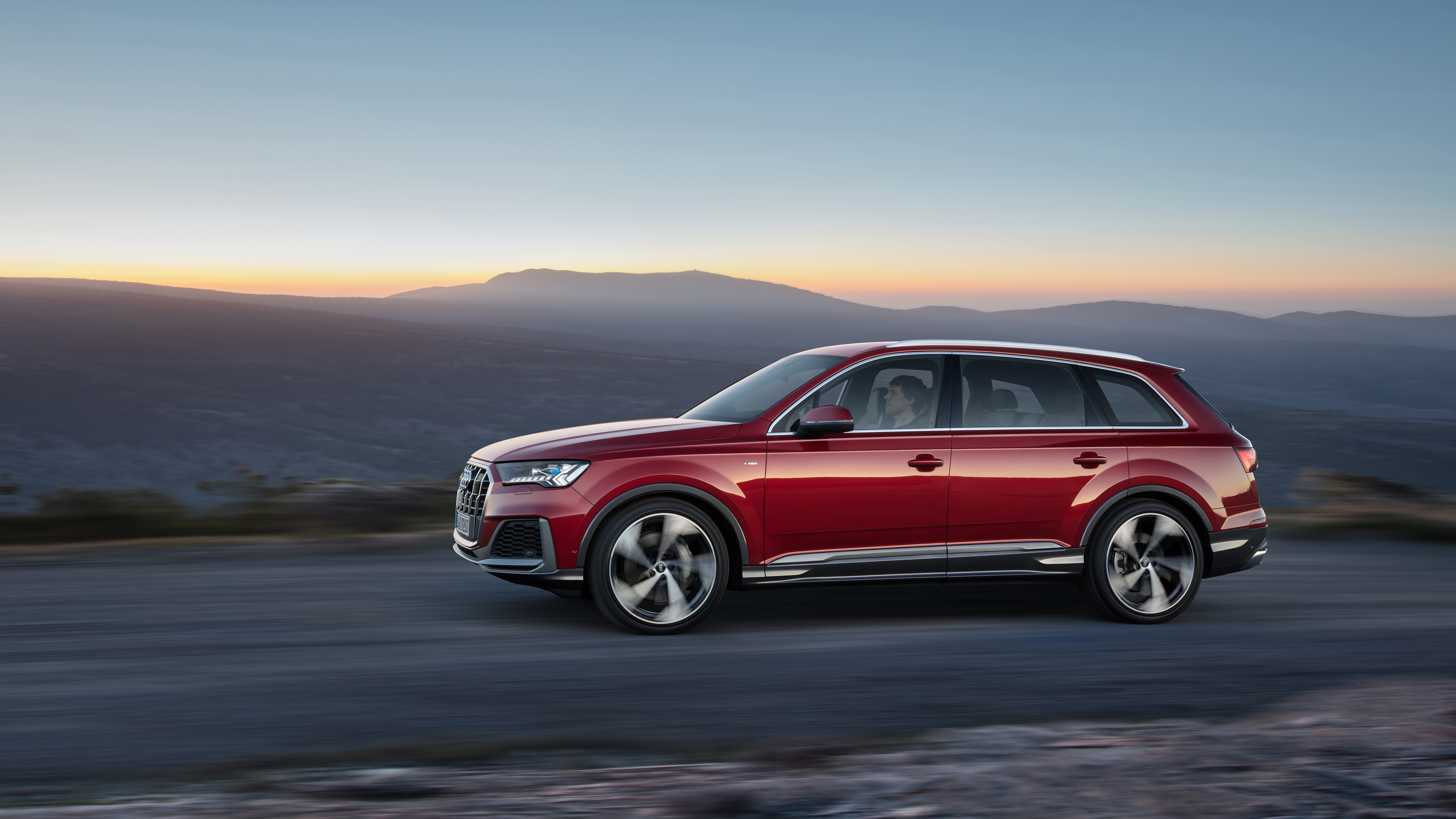 ‘Imposing’ is one way to describe the Audi Q7.

The more powerful 3.0-litre diesel engine is a perfect companion for the Q7 as, like a good espresso is exceptionally strong and smooth. It makes even towing simple.

If you can’t stomach the thought of a diesel, the 55TFSI petrol engine is a punchy engine that loves to be revved.

Early cars had conventional suspension, and while very comfortable, can get caught out by the odd sharp bump. Later cars have air suspension as standard, and are supremely comfortable for wafting around in.

The steering is sharp, and the Q7 handles better than any large SUV has a right to. Just bear in mind it’ll feel every inch of its size when you try to park it in a multi-storey car park or do a U-turn in a busy street. 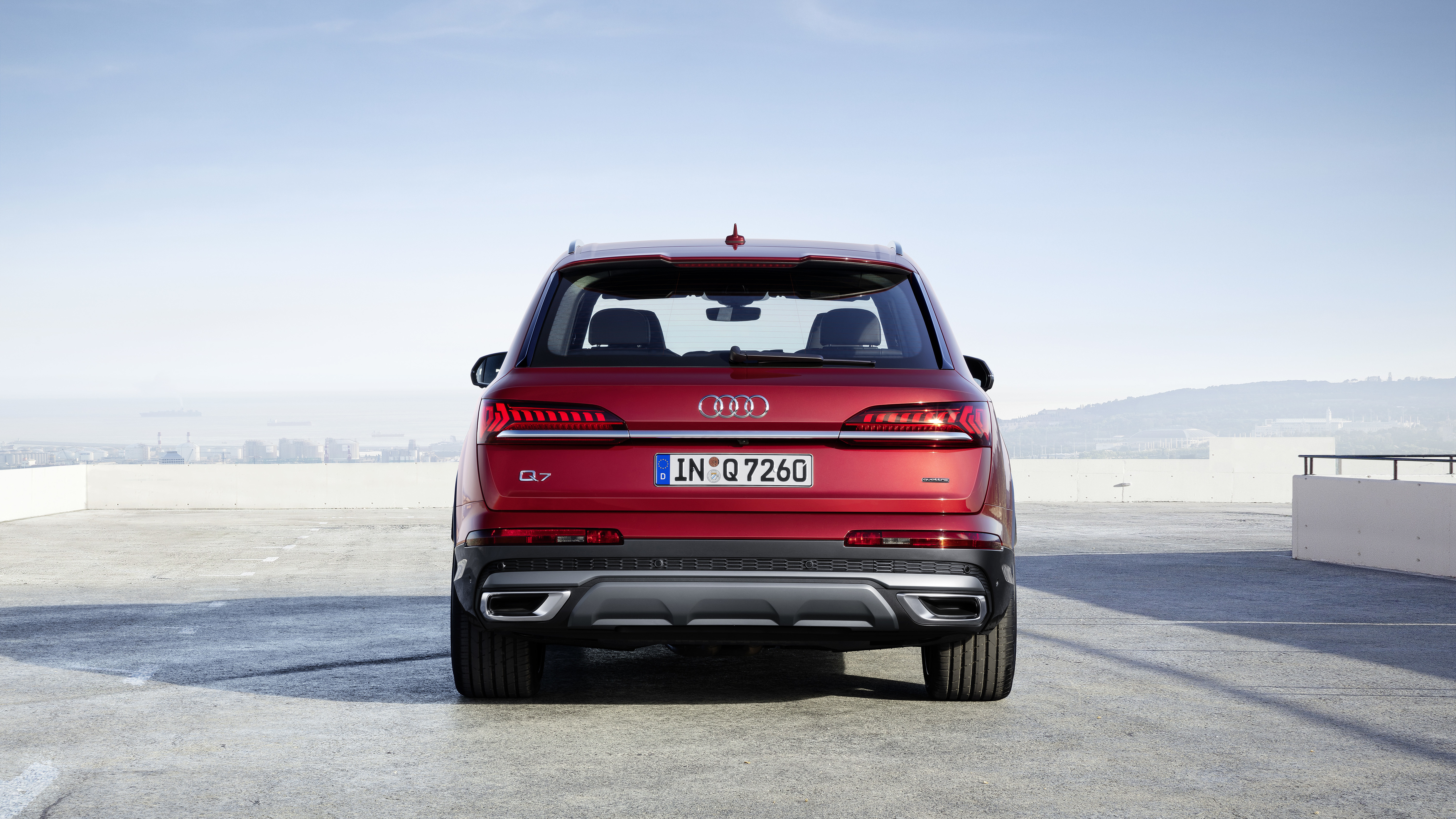 The steering is sharp, and the Q7 handles better than any large SUV has a right to

If there’s anything out there that’s better built than the Audi Q7, it probably has a large gate with ‘Blenheim Palace’ emblazoned on it. That’s because the Audi Q7 is one of the best-built cars anywhere.

Audi has long been a master of the interior art - the Q7 represents its best effort yet. Everything flows from one panel into the next, and the amount of standard technology is, well, wow. Ahead of the driver sits Audi’s Virtual Cockpit display, which displays absolutely every piece of information you could need - from driving info to a sat-nav map.

Early examples had a large infotainment screen that rises from the top of the dashboard and which is controlled by some buttons and a touchpad down by the gear selector. In later cars, this screen became larger and turned into a touchscreen below the vents. 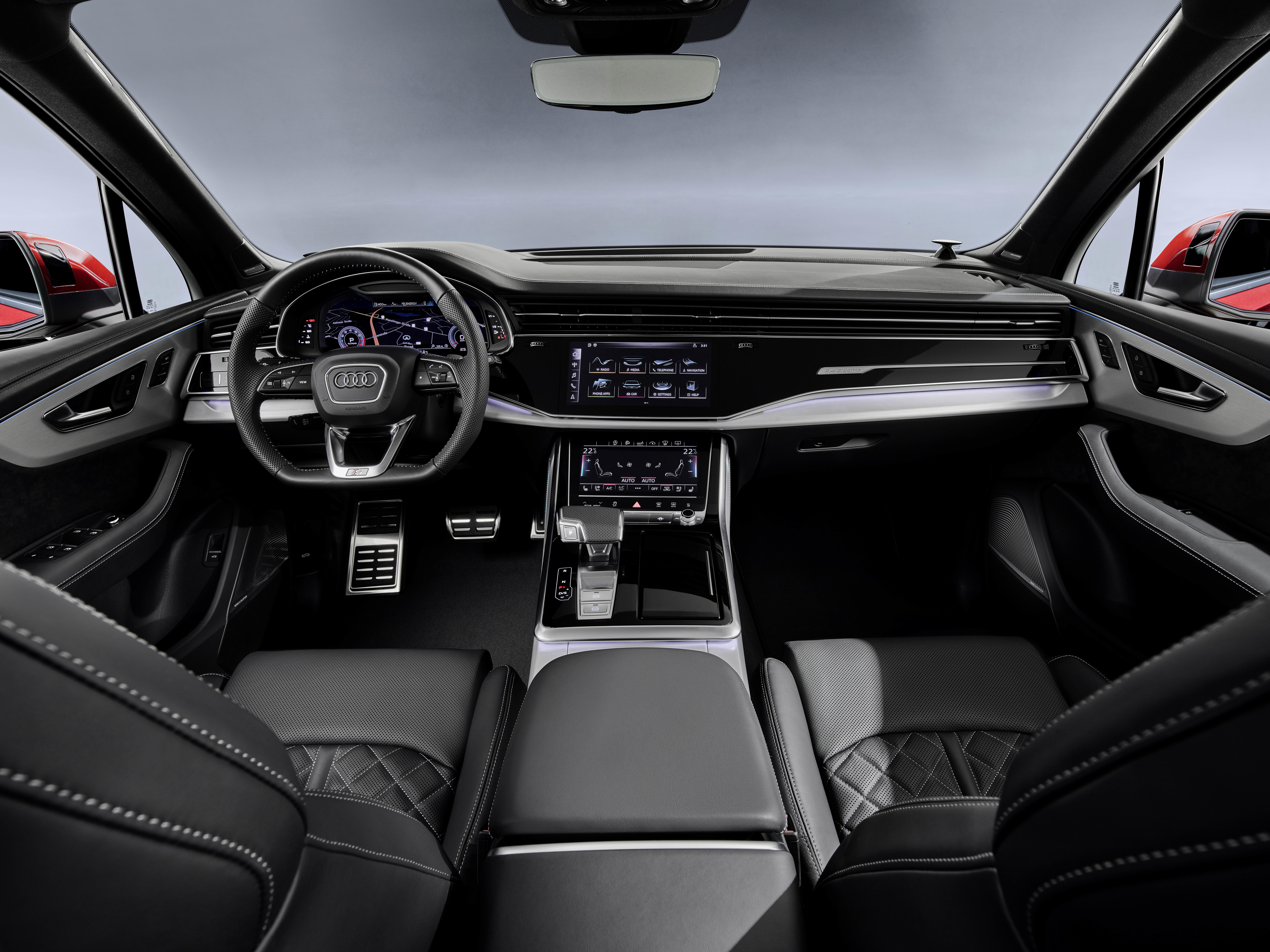 The climate control system is operated using dials in early cars, and a separate touchscreen in later versions. A large centre console by your left thigh houses the gear selector and a few decent-sized cubbies.

As you’d expect, everything you sit on and touch feels beautiful and the bits you move, such as the seats and column stalks, feels exceptionally well engineered.

Even the door pulls feel luxurious, and the smooth way that the powered tailgate lifts and lowers itself just oozes class. Getting comfortable is easy, too, using the electrically operated driver’s seat, which can move in a multitude of directions.

Anyone who needs more space than an Audi Q7 can offer is, frankly, being a bit greedy. There is an enormous amount of space up front for even the tallest of lankies to get comfortable, and there’s enough adjustment for you to be comfortable even if you’re a bit shorter of stature.

Better still, 3 adults behind 2 tall adults will feel completely happy with life, and the couple who end up in the rearmost seats will be relatively comfortable - as long as the journey isn’t too long. Kids, however, will be completely happy back there.

The good news is that the Audi has usable luggage space even when all seats are in use, and when you fold down all the seats there’s enough space that you’d feel justified in putting a ‘Transit’ badge on the back end. 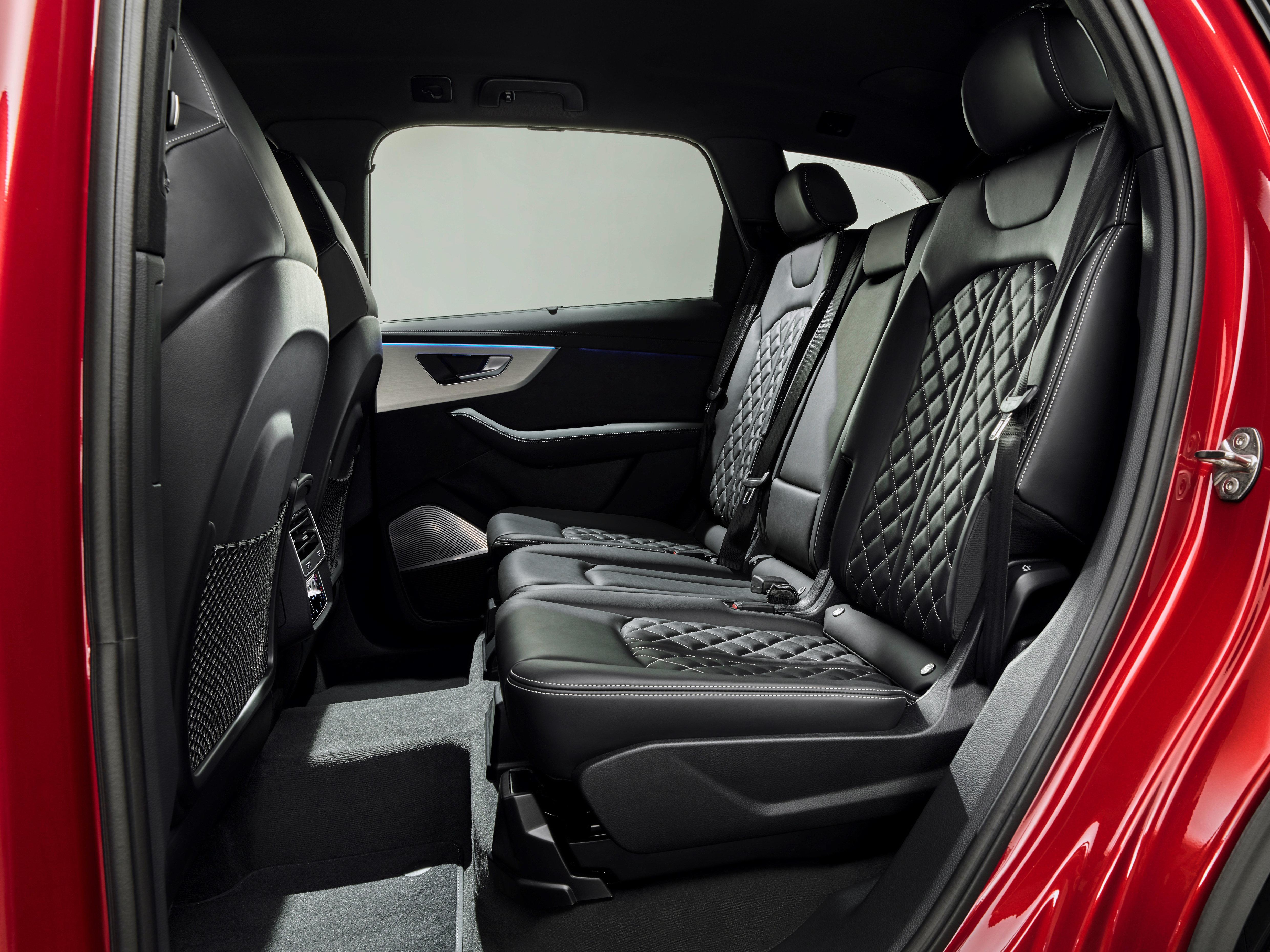 Let’s get one thing straight – you don’t buy a 7-seat SUV with fuel economy in mind. Having said that, the Audi Q7 isn’t bad, because the higher-powered diesel engine can manage an average of up to 48.7mpg. The 55TFSI petrol, will manage an official 26.9mpg - you’re unlikely to get close to that is you load the car up or put your foot down.

Insurance is undeniably towards the top end of the scale, starting at group 35 and ending at group 50. However, the Q7 is safe, with a full-on 5-star crash rating from the experts at Euro NCAP.

If you’re in the market for a car that will make you feel very good indeed about what you’ve chosen, then the Audi Q7 will make a fine choice. As you walk up to it, it looks superb, managing to combine vast dimensions and upper-class panache without looking in any way brash. It continues that impression inside, too, where it feels more than worth the money. Add in the facts that it has more space than you’re ever likely to use and more high-tech equipment than anything that doesn’t have NASA on the side, and it’s almost the perfect package.

There are all manner of alternatives for the Audi Q7 buyer to consider:

There really is little to fault about the Audi Q7, a car that epitomises brand ethos of high-quality motoring with great efficiency. It is enormous outside and in, and it has an interior guaranteed to make you feel like you’ve made it in life. Better still, it is brimmed with tech to keep you safe.