The Peugeot 107 was a bit of a trend-setter back in the day. Yes, it was cute-looking, and yes it was also cheap to run, but one area in which the 107 has always stood out was in the fact that it has more safety equipment than most. Vital when so many are bought by new drivers.

If you were to look up the definition of ‘cute city car’ in the dictionary, there’s liable to be a picture of the Peugeot 107 there to illustrate the point. It really is a rather attractive little machine, which is partly why it appeals so much to young drivers.

Just look at that front end. In early cars the grille was shaped like a smiling mouth - indeed, the 107 looked like it had stepped straight out of a take from Pixar’s Cars. Later versions have a fractionally more business-like front end - it’s a pretty thing nevertheless.

Moving along the sides of the car, the wheels are quite small, which helps with both urban nimbleness and keeping down costs. They don’t look too small though.

The profile is that of a slightly curvy bubble, and you also have the option to buy a Peugeot 107 with 3 or 5 doors. Either looks equally attractive. The rear end comprises a tailgate that’s basically a large glass panel, flanked by stacked tail lights. 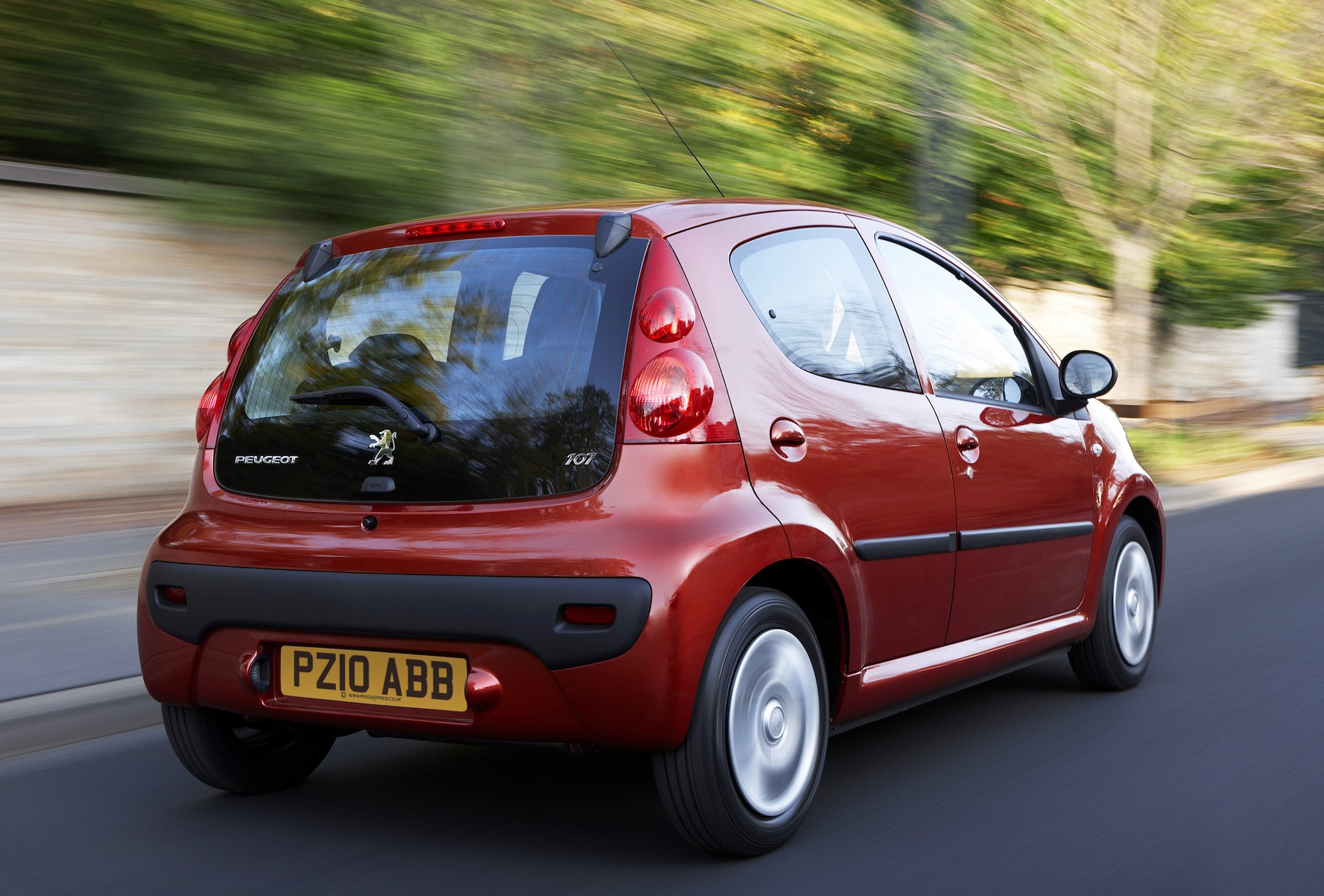 If you were to look up the definition of ‘cute city car’ in the dictionary, there’s liable to be a picture of the Peugeot 107 there to illustrate the point.

Take a look at the Peugeot 107’s performance numbers and you could be forgiven for assuming it’s a bit dull. After all, it has a 3-cylinder 1.0-litre engine with 68bhp. You’d be mistaken, because the way it drives gives the lie to those stats.

The 3-pot engine is a potent little thing that pulls fairly strongly from the get-go, and which also loves to be revved when you really want to make progress.

The steering is light and sharp, which is precisely what you need in the 107’s main battleground, namely the city. It’s perfect for when you’re nipping around a multi-storey car park or darting into a parking space.

If the 107 has a weak spot, it’s that when you venture out of its urban comfort zone, it can be rather too keen to let you know about how hard it’s having to work to keep up. 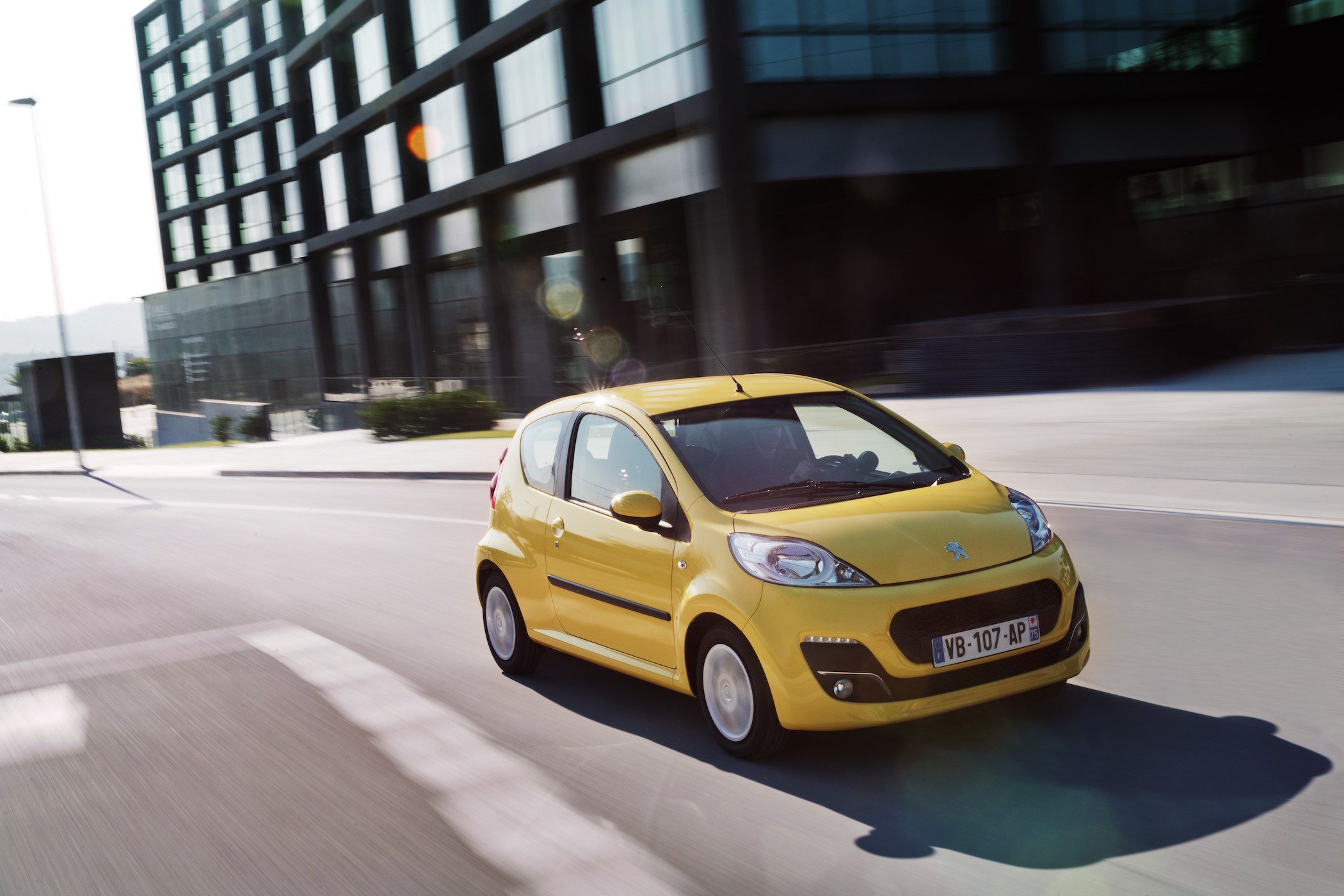 The 3-pot engine is a potent little thing that pulls fairly strongly from the get-go.

Simplicity is the name of the Peugeot 107’s game where the interior is concerned, mainly because if there isn’t much in there in the first place, then there isn’t that much to go wrong.

Having said that, the 107 manages a neat balance of being simple, yet not feeling spartan in the process. It has a neat, funky design that perfectly nails the brief of being cool as well as inexpensive.

The doors feature the basics while at the front edge is the joystick for the manual door mirror adjustment. The steering wheel itself is a delightfully old school affair that’s devoid of buttons, and instead has just an airbag. Infront of this is a simple instrument pod. Some models also have a supplementary rev-counter in a separate pod mounted at two o’clock from the main pod.

The audio system is a CD/radio system with an AM/FM tuner. It also has an aux-in socket for you to plug in your phone. Below this lie 3 buttons – for the heated rear window, the hazard lights and the air-conditioning (where fitted), and under these sit the controls to vary the temperature and air flow.

And that’s your small onion (shallot). We said it was simple. The good news is that it all feels rather nicely put together. 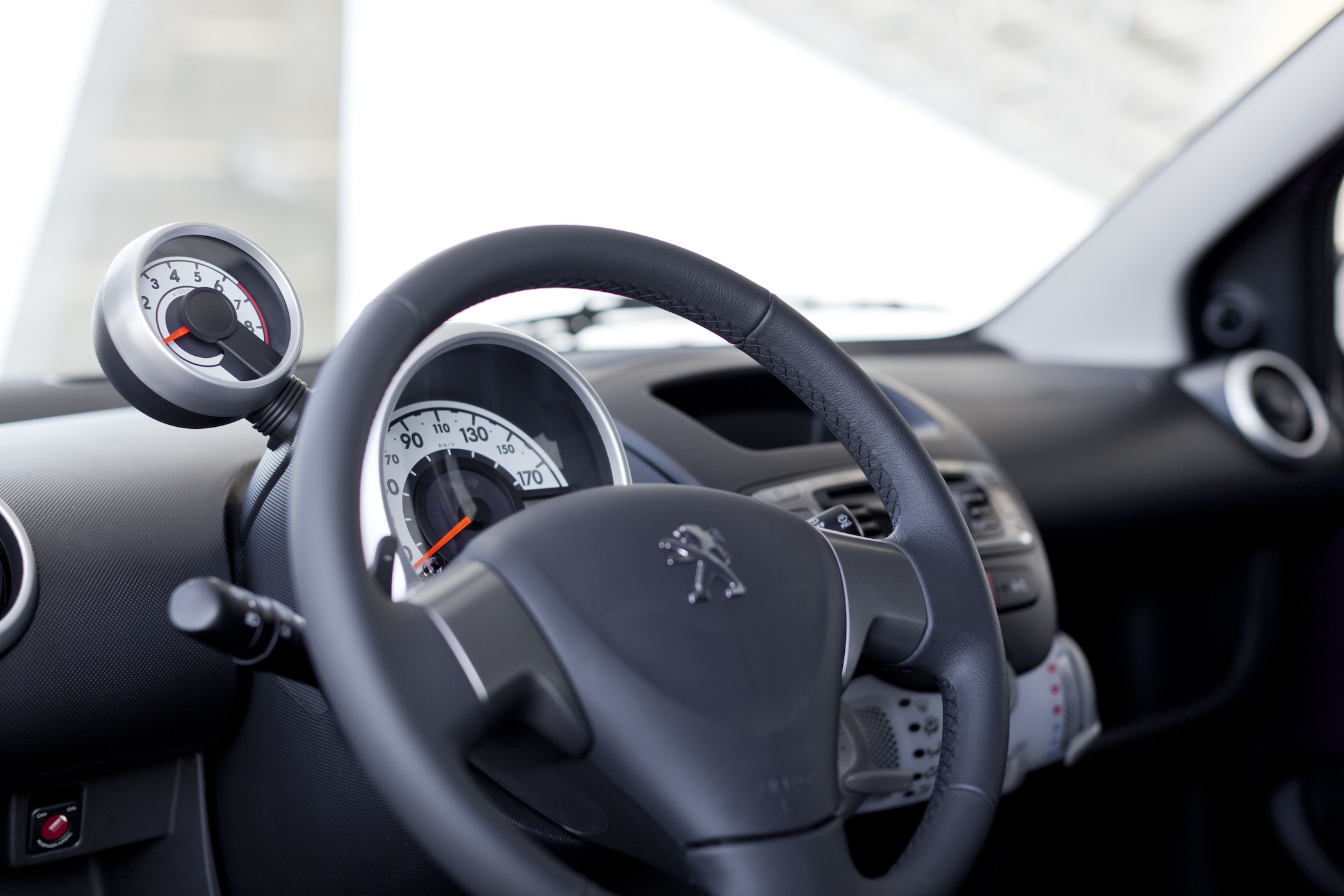 Yes, the Peugeot 107 is small on the outside, but it’s perfectly roomy enough for you and 3 mates. You might not be able to stretch out in front, but there’s more than enough legroom for you to avoid feeling cramped.

There’s also plenty of headroom, and even though there’s no seat-height adjustment you won’t feel like you’re having to peer over the steering wheel rim.

Those in the back will need a bit of compromise from those in front if they’re to feel completely comfortable. The boot, however, is small. Wherever you go in your 107, you’ll need to pack light, and there’s also quite a lip to lift items over.

This is a car designed to get you from here, to over there, usually through a traffic jam - so it needs to have a really light thirst. And so it does, with an average economy figure of 65.7mpg, which is great for a petrol car. There’s also a version with an automatic gearbox, which manages 62.8mpg. Can’t really argue with either of those.

It makes a great first car, too, because it kicks off in group 3 for insurance, and rises to just group 5 for a higher-spec model.

The Peugeot 107 is almost guaranteed to put a smile on your face, and not just because it has a smile on its own face.

It’s a great car for first-time car owners, young drivers, and those who simply want cheap motoring with a bit of entertainment. And it isn’t just a bargain-priced runabout. It has enough space for you to have a great night out with three mates, and it’s high-tech enough to let you plug in your phone and listen to your own music selection. Better still, it’s basically the same car as the reliable Toyota Aygo, so it shouldn’t let you down.

There’s a range of options to choose from if the 107 isn’t for you:

The Peugeot 107 is a tiny little city car. It's perfect for those wanting an affordable hatchback which will get them from A to B while also being incredibly reliable and having sufficient kit.