The compact executive car sector is one with a definite German accent. Nissan has decided to take on the likes of BMW and Audi with the luxurious Q50. Have they succeeded in such a competitive market? Read on to find out.

Executive saloons usually have pretty conservative designs and so the challenge of making one to stand out from the crowd in the office car park is a bit of an open goal. It’s also one that Infiniti have scored with the Q50s swooping lines and curvy styling with a bonnet that dips down dramatically, contoured doors and a sloping back to the roof.

This car looks aerodynamic and has lots of the hallmarks of a luxury car that certainly help to turn heads. So, if this is one of the boxes that you’re looking to tick with your next car, get your pen (and debit card at the ready) at the ready.

Unfortunately, this is where the wheels start to come off a little with the Q50. The general handling is fine, not exceptional.

Many drivers have commented on the Direct Adaptive steering that a few of the cars feature. This is an electronic system that controls the steering with no mechanical link. Its intention is to make the steering more responsive and can be adjusted to suit the driving conditions. The reviews haven’t been great – with many saying that it just doesn’t give the feedback through the steering wheel that a normal system does. 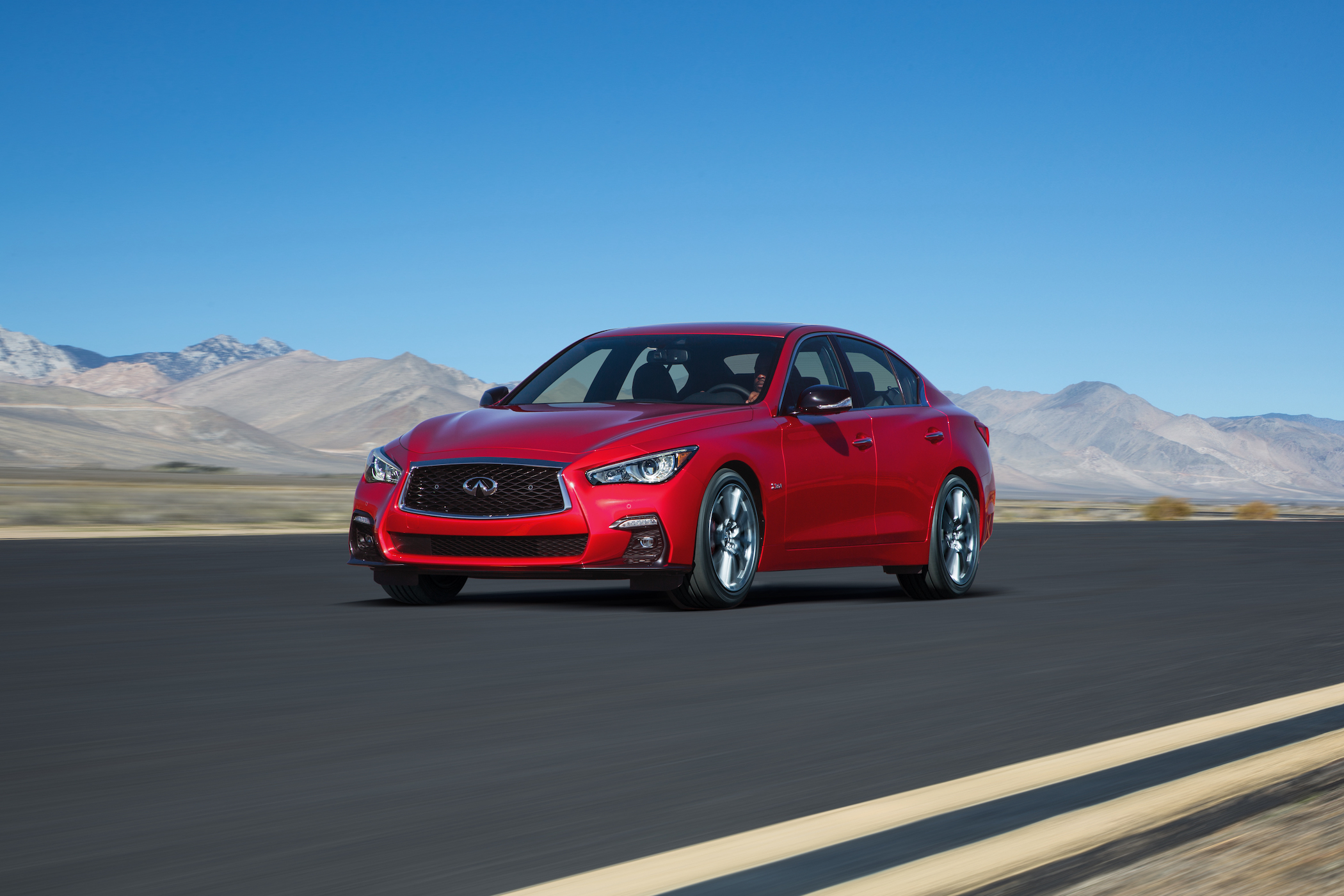 If it’s going to compete in the executive car sector, the car’s interior is going to have to be pretty impressive. Infiniti has decided the best way to do this is to pack the Q50 with technology. A great example of this is the i-Key, which is a fob that can be used to programme 96 different settings covering up to 4 drivers’ preferences like seat position, preferred radio stations and driving mode. It’s like your car’s own personal mobile.

The seats themselves are also very comfortable, apparently because the designers worked with NASA to replicate ones used in the weightless environment of space. 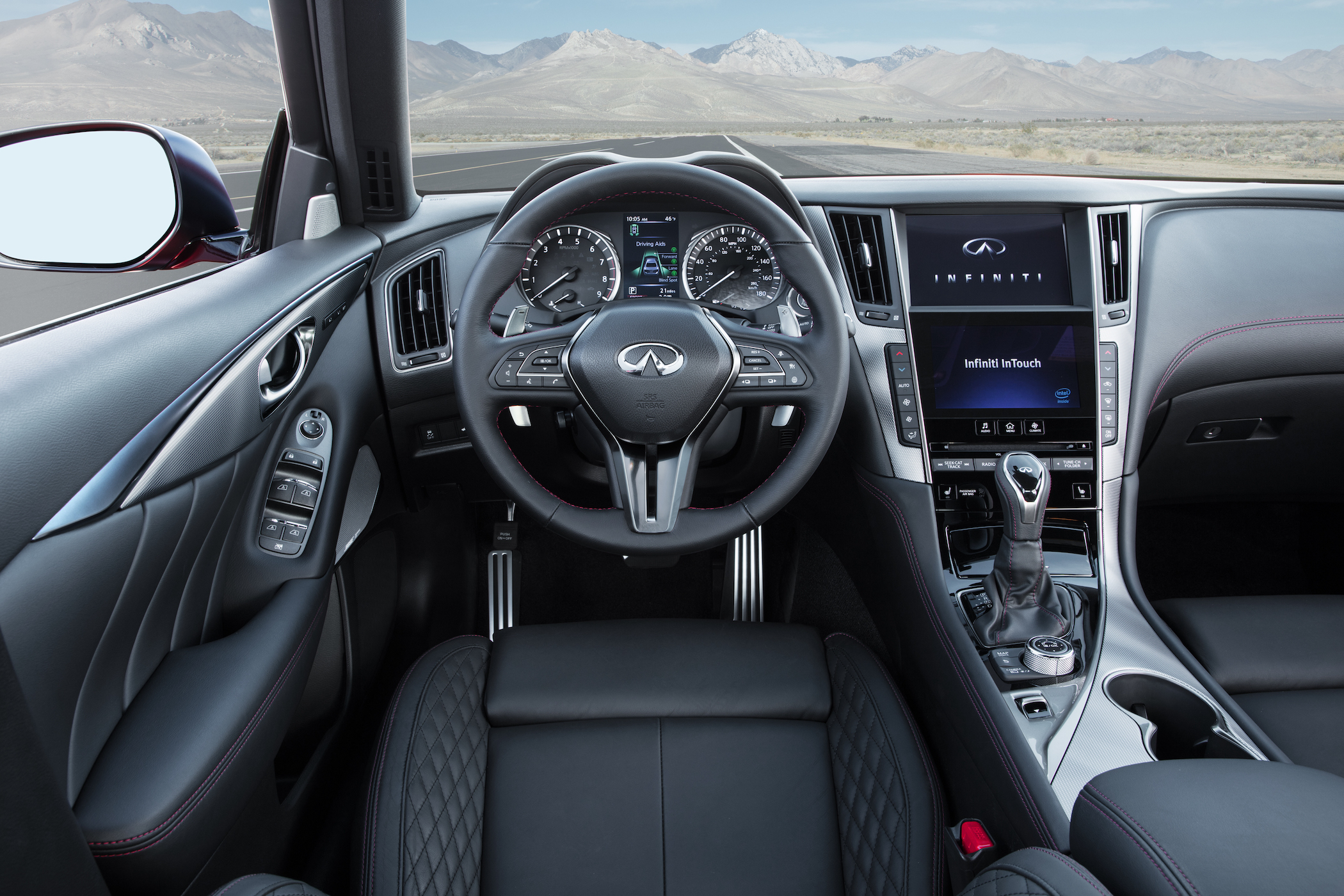 There are no less than 2 touchscreens, the top one is where you’ll find the sat nav with the lower one for climate controls, in-car entertainment and similar features. The latter has been designed to look and feel like an iPad in use – and is just as prone to getting smudgy fingerprints all over its shiny screen.

It does look like economies have been made on other switches though, which are not all that different from those that you’d find in a standard Nissan.

The sleek lines of the Q50 mean that headroom’s not great, especially in the back where there’s limited legroom too. There’s also a big transmission tunnel for the rear-wheel drive that makes it even worse for any fifth passenger sitting in the middle of the 60/40 back seat.

An executive saloon isn’t the car to choose if you’re going to be transporting lots of flat-pack furniture or other large items, especially compact designs like the Q50.

That said, the boot is large enough for most essentials such as packed shopping bags, buggies and sets of golf clubs. One minus is that wheel arches take up quite a lot of room and make it a bit of an awkward space.

Opt for the hybrid model and you’ll have even less space thanks to the room taken up by the batteries. You’ll also find that the back seats don’t fold down like they can in the petrol and diesel Q50s. 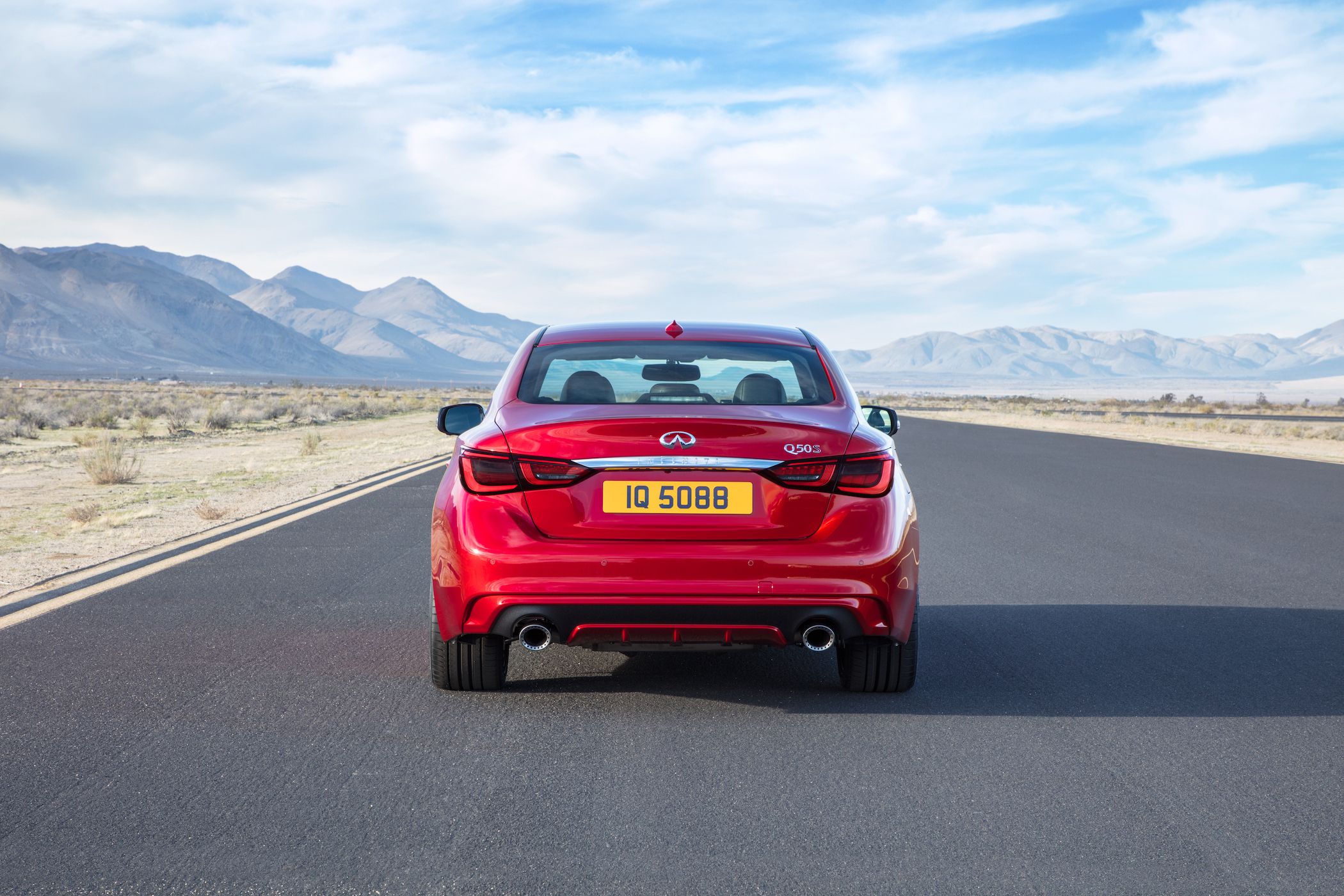 For sheer economy, the 2.2 litre diesel engine is the obvious choice, offering you over 65 mpg – although at motorway speeds it can be a noisy experience that will make you grateful for the Q50’s good sound system.

Servicing costs are reasonable and the main reliability issues reported seem to concern the sat nav system – so there’s not much to worry about on that score.

If looks and tech are important to you, then the Infiniti Q50 could well be the next car on your driveway. It’s not perfect, but it stands out in the sector with eye-catching lines as well as a good range of engines to choose from – and where else are you going to find a car with seats designed by NASA?

It might not quite take you to infinity and beyond, but the Q50 is quite good enough to hold its own against some pretty stiff competition from Audi and BMW. So, it’s great if you’re daring enough to be a little different.