Regular Alfa Romeo Stelvio not bonkers enough for you? The Quadrifoglio uses a twin-turbocharged V6 engine that’s derived from a Ferrari V8. Yes, you read that correctly. And the fun doesn’t stop there…

Is the Stelvio Quadrifoglio the best-looking SUV on sale? That’ll be entirely down to personal preference, but when it comes to beauty, muscle and road presence in an SUV package, we’re sure you’ll agree that the Stelvio offers a lot. Its swooping lines, swelled wheel arches and 20-inch (or optional 21-inch) forged alloy wheels combine for a masterpiece of performance SUV design. We’re smitten on first sight. 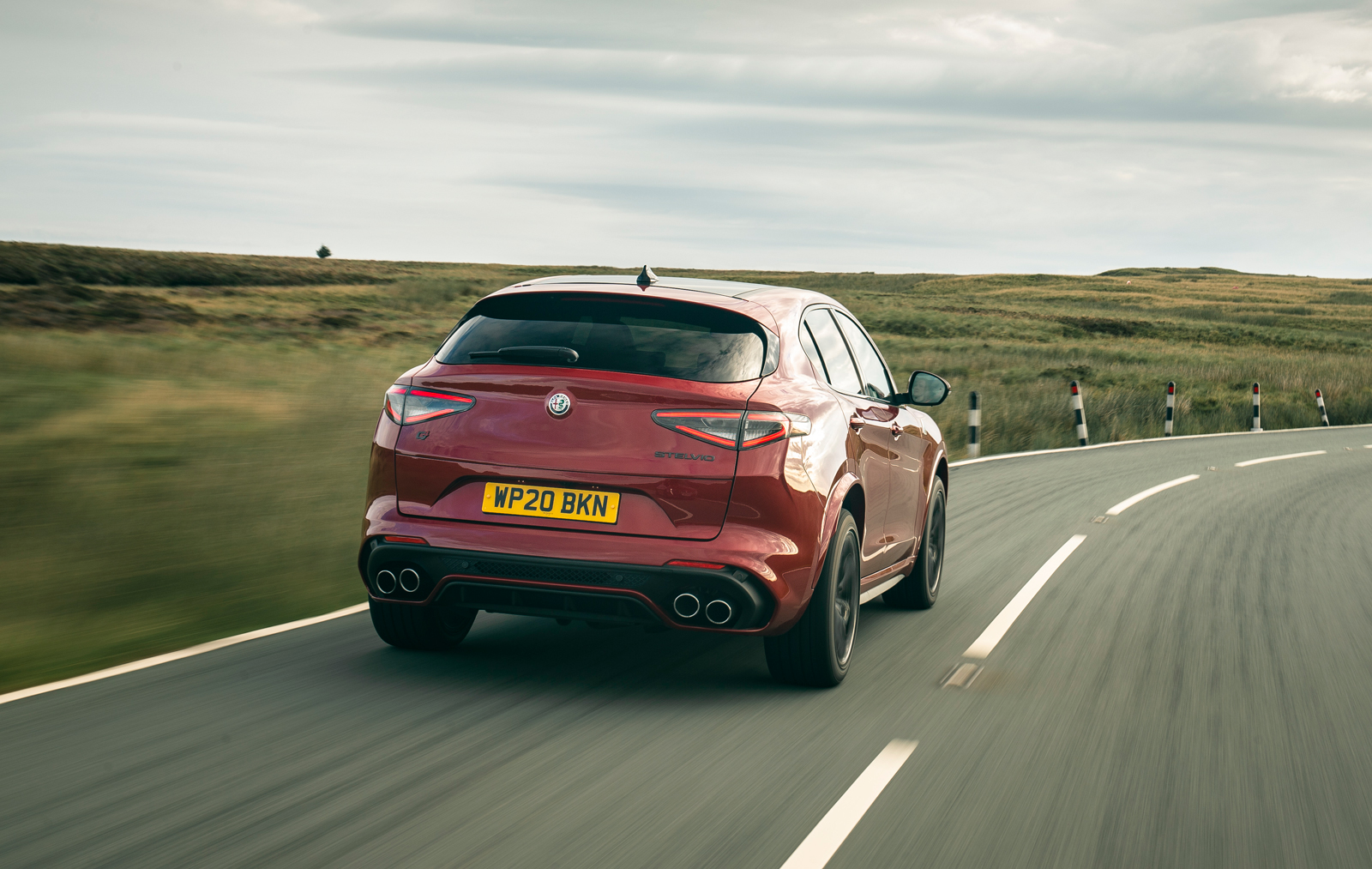 Certainly, the Quadrifoglio’s look does no harm to the underlying Stelvio design that we know well and love. It hints at some pretty hardcore performance. Which is appropriate…

Where do we start? That engine. Not only is it shared with The Alfa Romeo Giulia Quadrifoglio, one of the greatest performance saloons ever produced, but it also has technical relation to the V8 motor used in Ferraris of late. How awesome is that? Sure, with two fewer cylinders, it sings a different tune. But you really can feel the relation to the bigger supercar engine.

The Stelvio Quadrifoglio’s twin-turbo 2.9-litre engine produces 510hp and a maximum of 600Nm of torque, which for those who aren’t up to speed with the numbers, is a heck of a lot of muscle. And don’t you know it? From low down, the engine pulls hard, but it really, really gets going as you nudge the rev counter needle up to and over the 5,000rpm mark, where it really barks and sings. It’s thrilling. 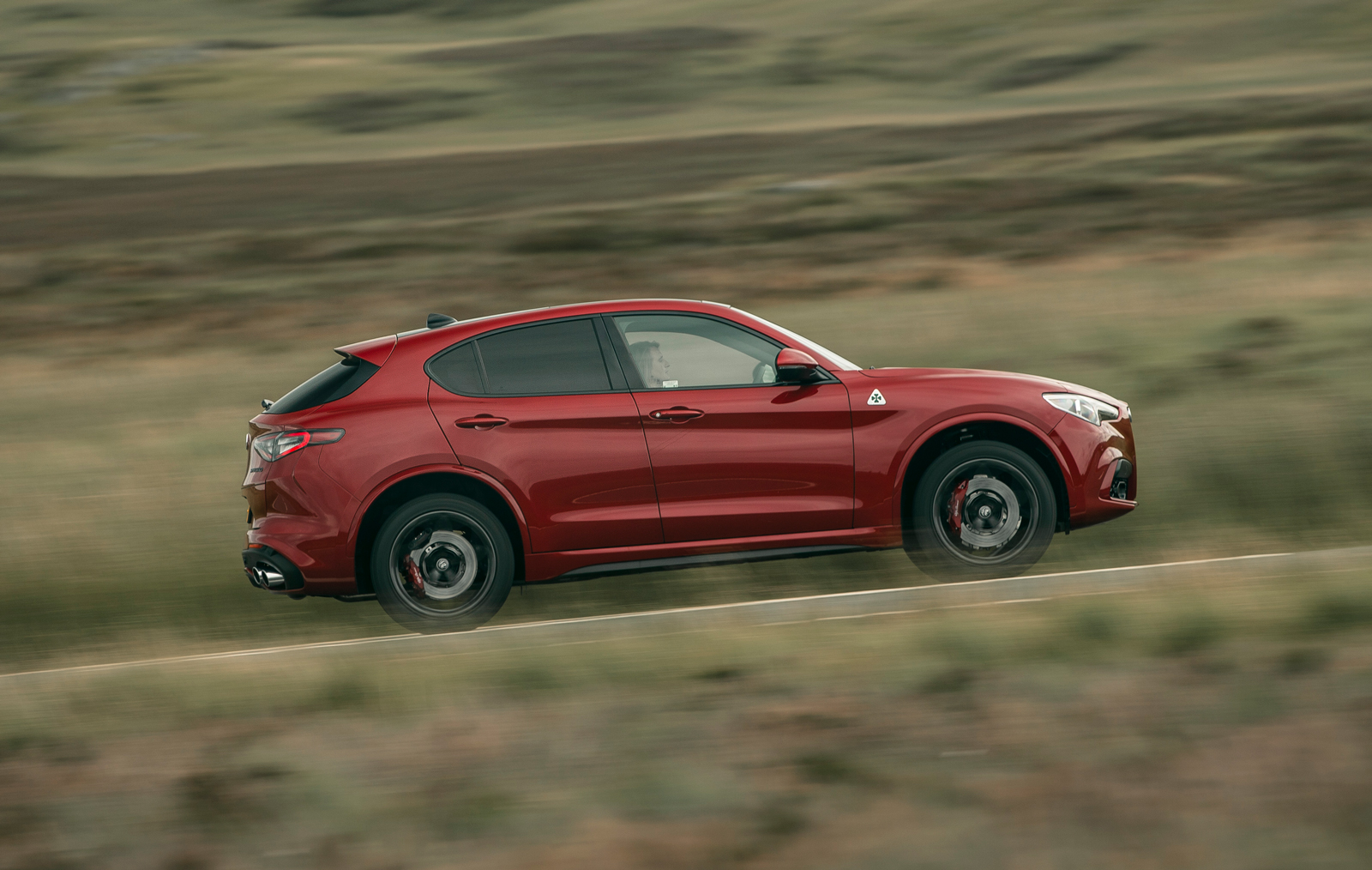 The engine is coupled to a fast-reacting eight-speed automatic gearbox that, if you prefer, can be manually controlled by a pair of tactile (the click action they provide is enormously satisfying) extended shift paddles. (Want to see and hear them in action? Handily, the new Alfa Romeo Tornale has the same pair, in our video here). In fact, the Stelvio Quadrifoglio in general is brilliantly tactile, with good steering feel and brake pedal regulation to go with that excellent engine and gearbox.

Then there’s the handling. While it’s taller and therefore slightly less glued to the road than the Giulia with which the Stelvio shares many parts, this Quadrifoglio is an excellent steer that’s willing and capable of dancing its way along a winding road. The all-wheel drive system offers enormous amounts of grip, but you can – if you so please – encourage slip under power. It’s a proper sports car experience. Best of all though, is the fact you can wind it all back and turn the Stelvio back into a comfortable, effortless family machine. Marvellous.

It really gets going as you nudge the rev counter needle up to and over the 5,000rpm mark 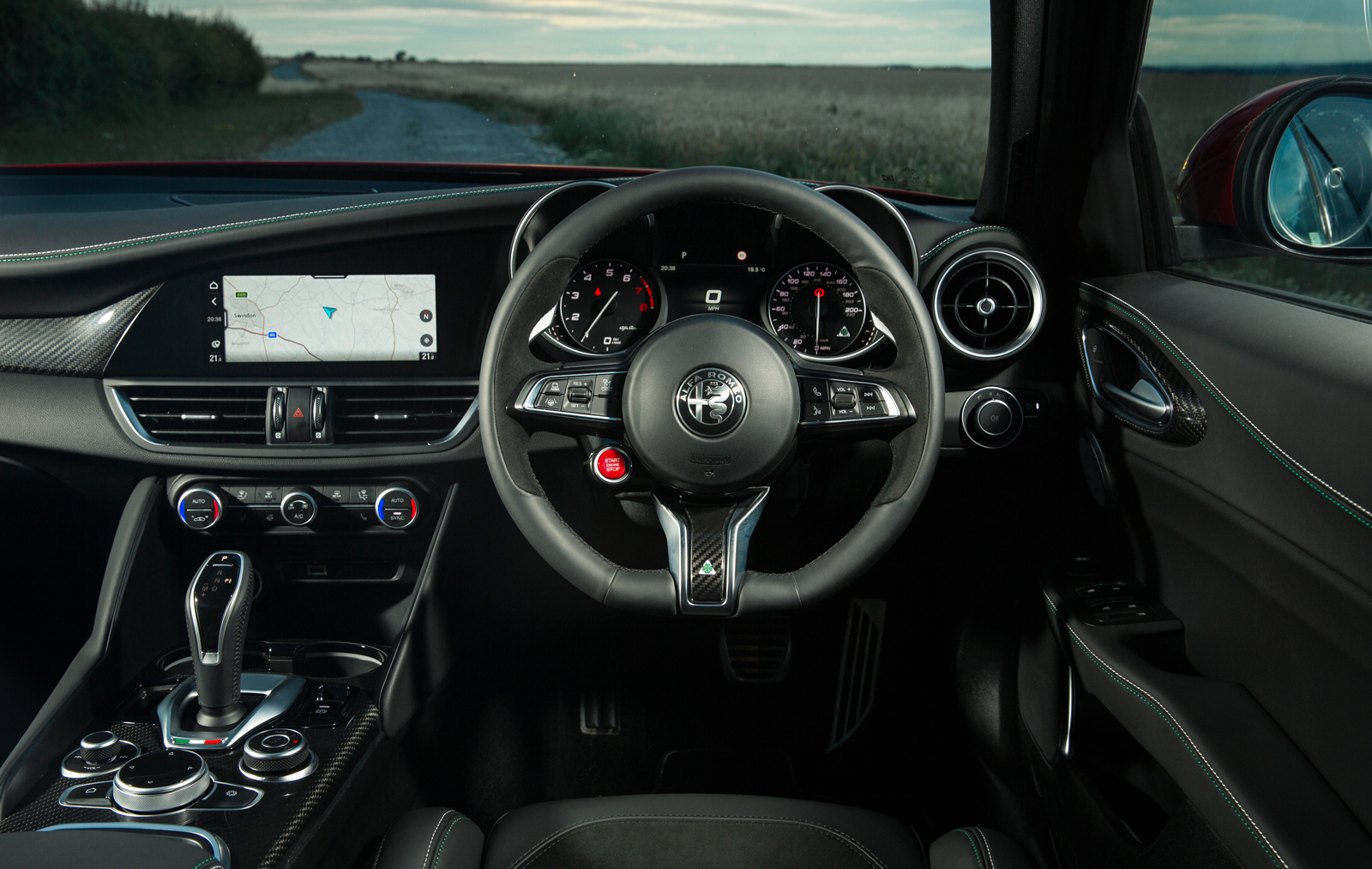 Compared with the non-Quadrifoglio-spec Stelvio (which is still a pretty sporting SUV, it should be said), the interior of Alfa’s hot SUV mixes luxury with flairs of raciness, and some tech. There’s a digital infotainment system in the centre console and a screen between two analogue dials in the instrument cluster, but compared with equivalent Audi and Mercedes models, the Stelvio interior isn’t particularly techy. No, the focus here is on style and pizzaz. And it works.

The leather- and Alcantara-wrapped sports seats are figure-hugging, adding to that performance car vibe. And the touch surfaces are all coated in soft or racy materials. It feels plush and appropriate – and so it should in a car that starts from over £73k. Not that you ever feel short-changed when sat aboard Alfa Romeo’s top SUV model. 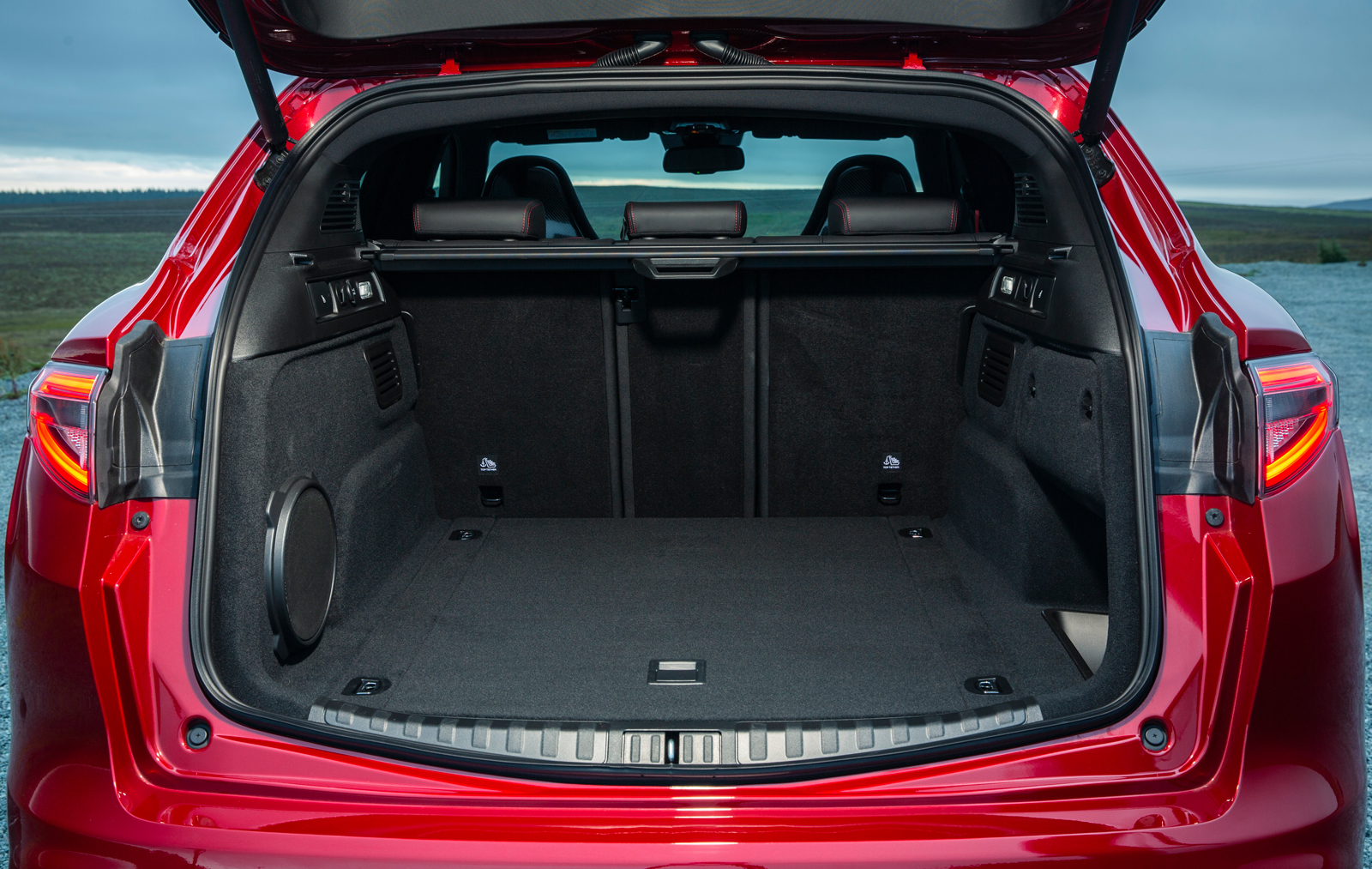 Despite the sporting makeover, as far as practicality is concerned, you don’t really lose anything in the Quadrifoglio. There’s a massive boot, capable of swallowing a family’s load of suitcases, and plenty of room up front and in the back for passengers. Four adults can comfortably sit aboard the Stelvio for long distances – and they’d be far from board with that emotional engine to listen to. 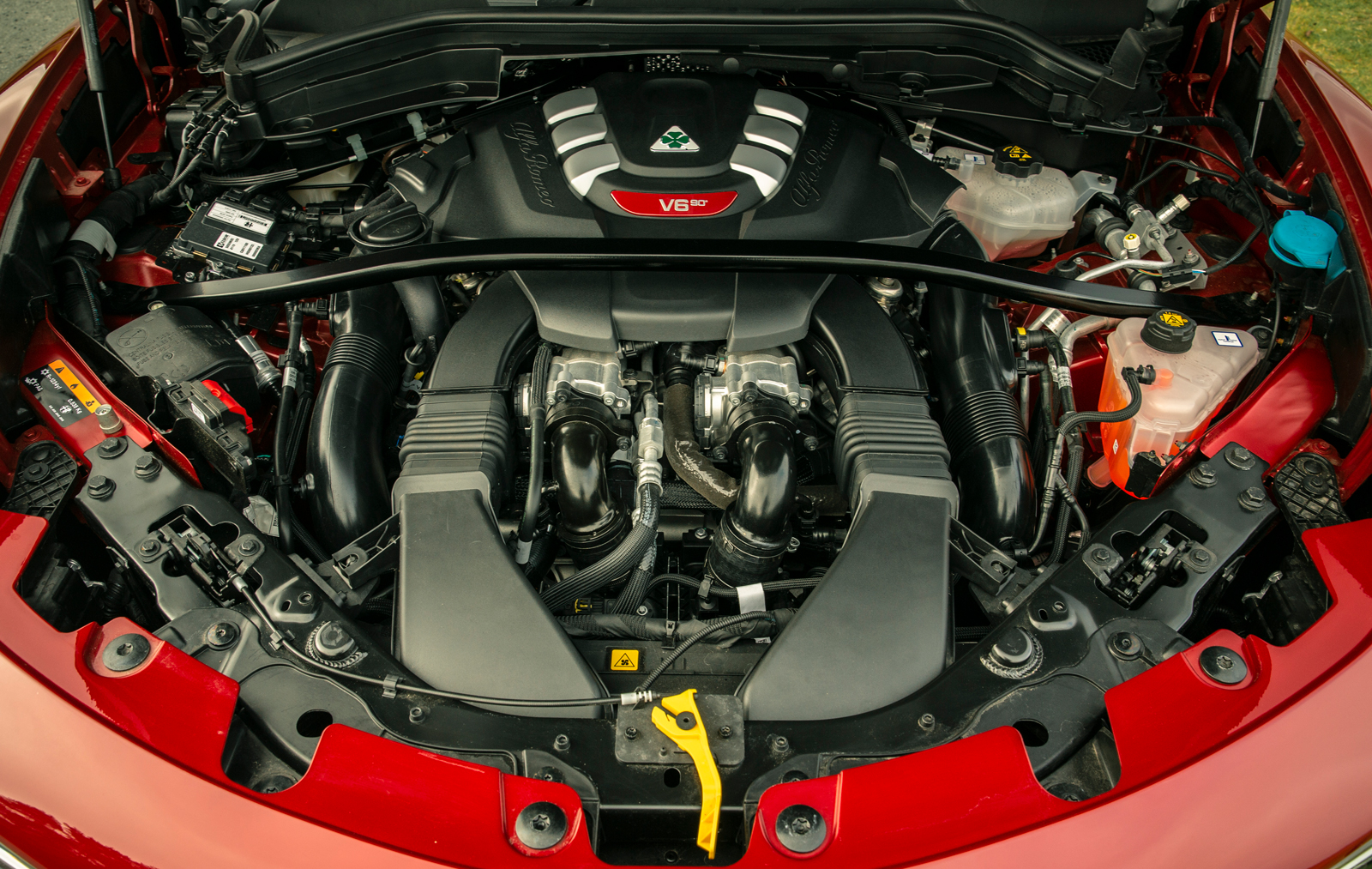 As a high-end performance machine with a finely-tuned engine and gearbox, the Stelvio Quadrifoglio is never going to be able to cut it with ecoboxes and the like when it comes to running costs. But the twin-turbocharged V6 engine under its bonnet is, at least, considered to be tough. Alfa Romeo has, with its latest crop of models – Stelvio and Giulia included – made big steps forward when it comes to reliability, too.

Drive sedately, and you can enjoy over 30 miles per gallon fuel economy. Drive the Stelvio Quadrifoglio as its maker intended and you’ll quickly half that figure. But you probably won’t mind, because, well, it’s fantastic.

It’s hard not to fall for the Italian flair and music of the Stelvio Quadrifoglio, and that’s before you’ve actually driven it. Is there a more desirable performance SUV? We think not.

An SUV with Ferrari blood in its veins? Sign us up!