If ever a car epitomised the phrase ‘growing old gracefully’,it’s theAlfa Romeo Giulietta. This stylish hatchback hasbeen around for more than a decade now– for those who remember, actress Uma Thurman was the face of the car on its release. To this day, it remains popular as – like Uma - its looks haven’t dimmed. Ithas the romance of the Alfa Romeo badge behind it, anda wide range of efficient engines to choose from.

You can’t really argue the Alfa Romeo Giulietta doesn’t look good; one glance at this attractive car and you know it’s a) Italian, and b) an Alfa.

The large triangular front grille gives the game away, as does Alfa’s tradition of having the numberplate off to one side of the bumper. The jewel-like headlights lead you on to the heavily sculpted bonnet, after which there’s a comparatively small windscreen and glass area, to emphasise the sleek design. 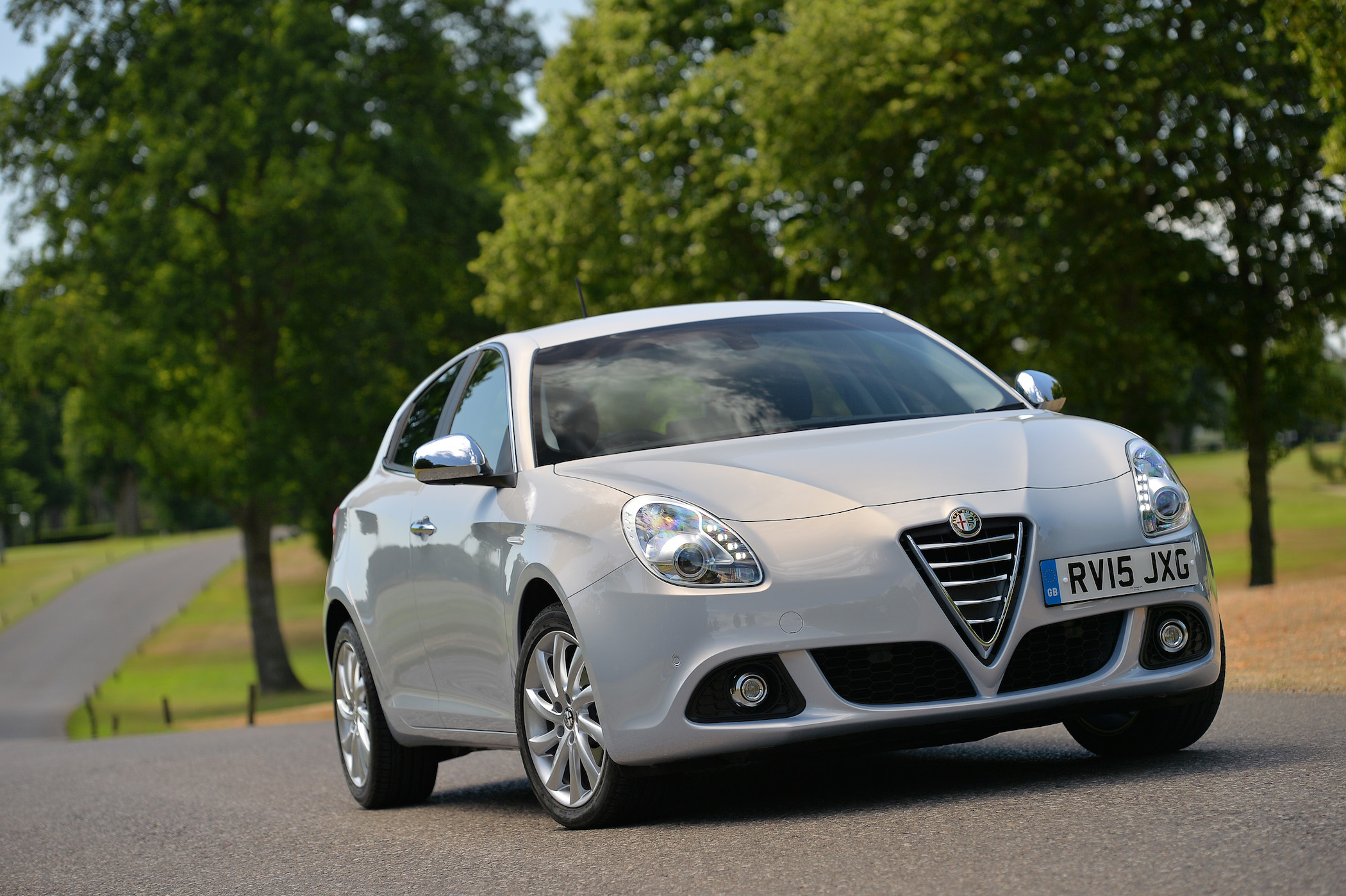 The sides of the car are quite curvaceous, and there’s a rising waistline, to give the vehicle an overall athletic stance. Alfa Romeo has also been clever by hiding the rear door handles in the trailing edge of the window. The tailgate isn’t the largest. Again, the taillights will never be mistaken for anything other than an Alfa’s.

The alloy wheels are also not particularly large, but they somehow look just right in the wheel-arches. It’s a testament to how right Alfa’s designers got the Giulietta in the first place that the car remains on sale today, seemingly without having aged at all.

One glance at this attractive car and you know it’s a) Italian, and b) an Alfa.

There are both diesel and petrol engines available in the Alfa Giulietta - the best options are actually the ones with the least power.

The 1.4-litre petrol turbo will rev impressively and make your Giulietta feel decently fleet of foot. It sounds great, too, which only encourages you to enjoy it while stationary. The diesel alternative is the 1.6 JTDM engine, which has enough muscle to get everything moving from a standstill with reasonable vigour. 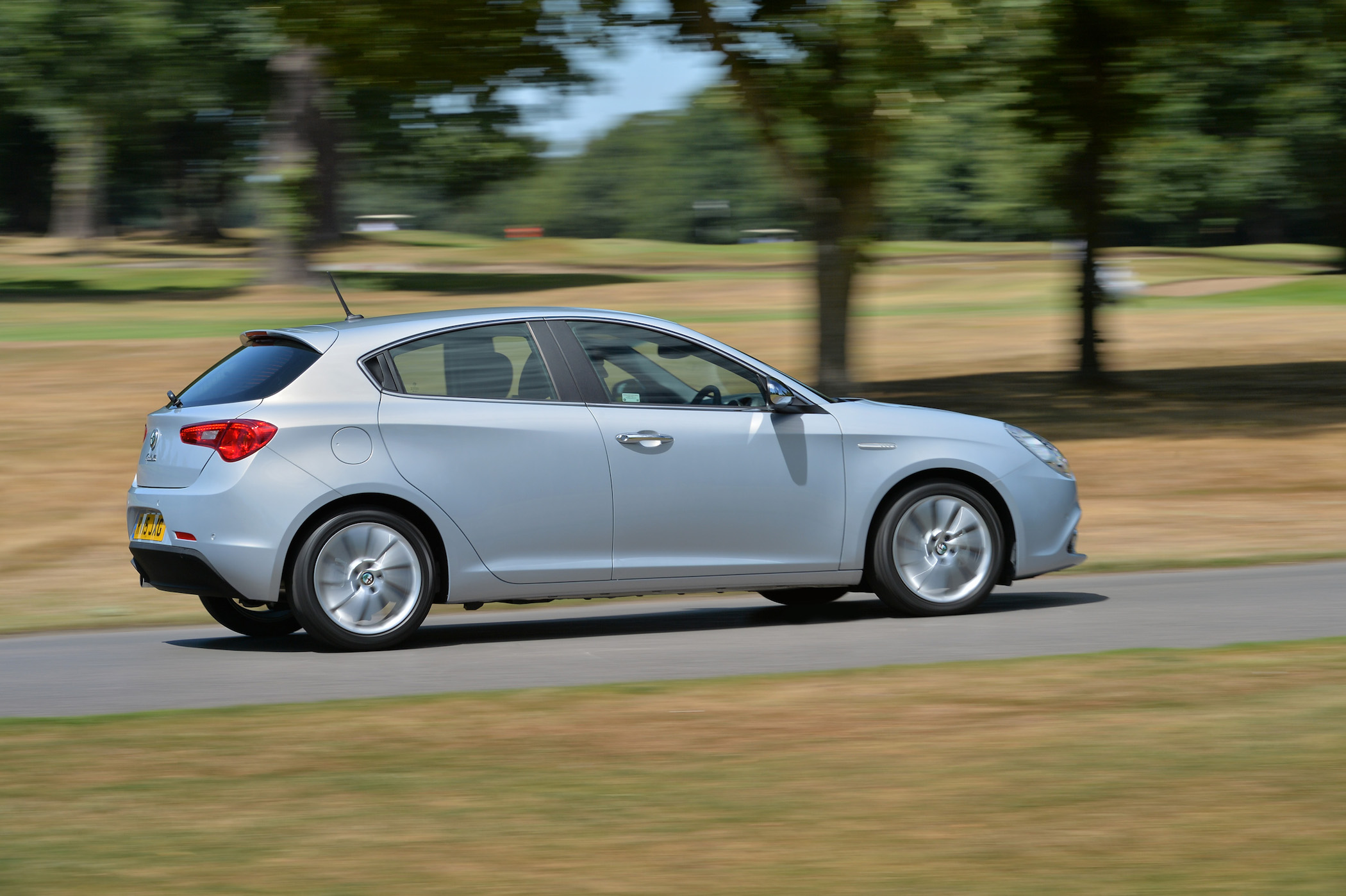 The gearshift in all Giulietta models is reasonably quick, although the fact that all pedals sit at different heights will take a little getting used to.

All Giuliettas have comparatively firm suspension, so are quite keen to let you know just how slapdash the road-building crew was. The upside of this is that it’s decently entertaining to drive on a twisty road.

All Giuliettas have a ‘DNA’ switch that allows you to tailor the accelerator and steering responses just the way you want to.

The best options are actually the ones with the least power.

Italian design and flair is present and correct throughout the interior of the Giulietta. From the second you sit in the driver’s seat you, know you’re in something a little different from the norm. The glass area is quite small and the pillars short and thick, giving you the feeling of being in a cockpit.

The centre of the steering wheel apes the triangular grille on the front, and in front of it sits an instrument binnacle that could have been designed 40 years ago – in a good way. There are separate dials for the rev-counter and speedometer, in the style of Alfas from the 1960s, and there are gauges for the fuel gauge and water temperature between them. Below these is a small digital display that shows other information, such as economy, range to empty and suchlike. 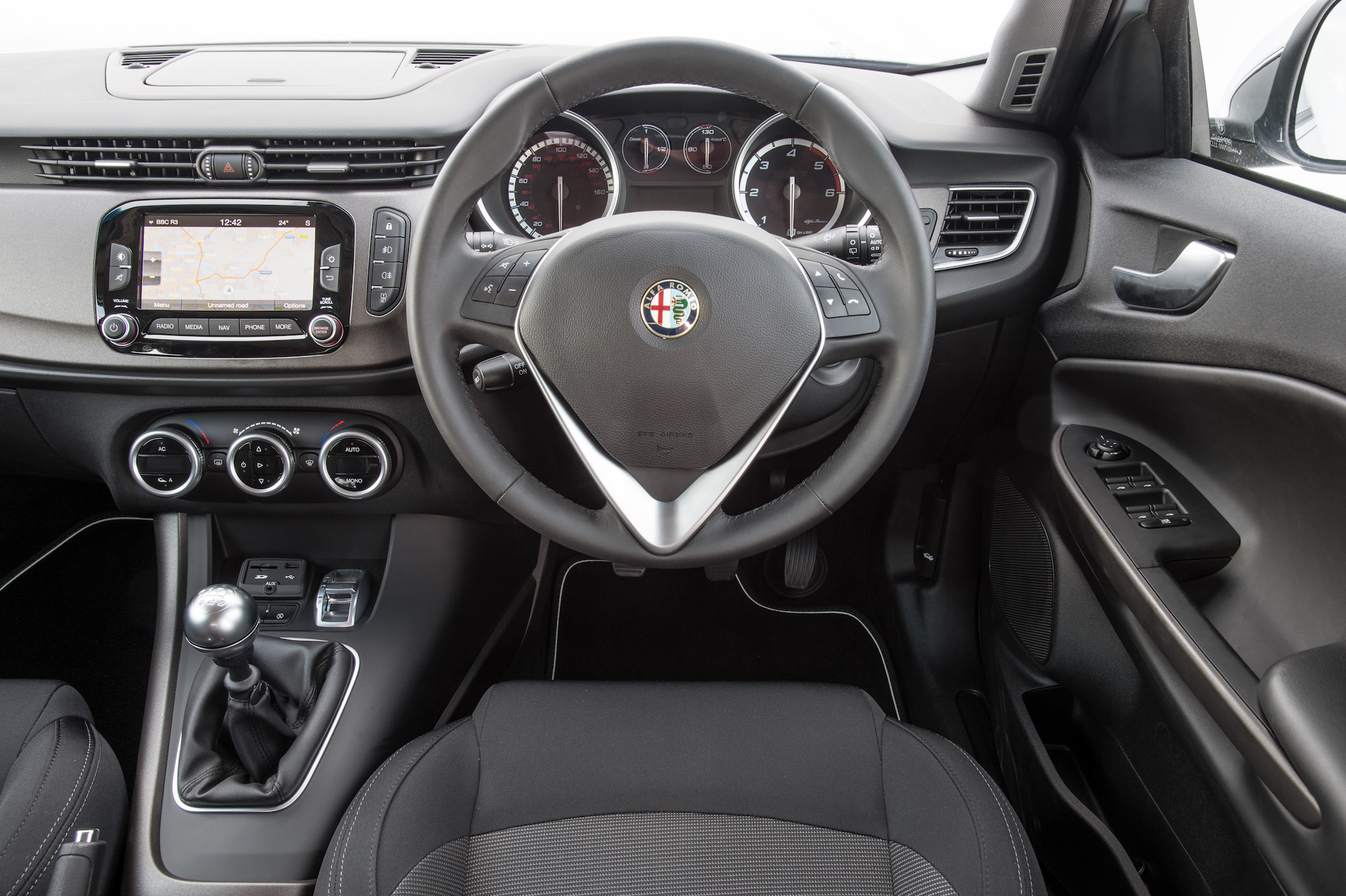 Immediately left of this sits the radio set-up, although later cars will have a touchscreen here. This allows you to operate the sat-nav system where fitted, the DAB radio, the mobile phone system and some of the car’s functions.

Below this sit 3 extremely clear dials that operate the air-conditioning/climate control system. On manual cars, you’ll notice a gearlever topped by a metal ball that is oh-so-tactile, while cars with an automatic transmission have a leather-wrapped gear selector.

In a cubby ahead of the gearlever is the aforementioned DNA selector, through which you alter the car’s character. The quality may not quite be a match for the Alfa Romeo’s rivals from Germany, but it’s still pretty good.

Out-and-out cabin space is perhaps not the Alfa Romeo Giulietta’s major selling point. Instead, it focuses on feeling snug around you.

Still, there’s a fair amount of cabin space up front for a couple of adults, although you might have to keep the driver’s seat in its lower setting if you’re tall.

The back seat area will feel quite intimate if you’re sitting behind a tall driver, because your legs will be brushing the back of the front seat. The sloping roofline will be in close contact with your hair, too. That said, it’s fine for shorter journeys or commutes.

The boot isn’t the biggest in the class, but it’s perfectly large enough for a family’s worth of weekly shopping or a couple of cases come holiday time.

The 1.4-litre petrol turbo has an official average economy figure of 39.2mpg, so while it isn’t the most economical it’s a long way from being greedy. The diesel alternative is the 1.6 JTDM engine, which offers an average of 60.1mpg – not bad at all for a medium-sized hatchback, such as this.

You might think an exotic Italian car might be costly to insure - you’d be wrong. Its insurance grouping starts at 15 and tops out at 31, although the latter figure is for the hot Cloverleaf model.

The Alfa Romeo Giulietta may not be the biggest, most practical, best made, cheapest hatch to run, but it absolutely stands out because of what it is, and what it offers.It’s one of the very best hatches to look at, and it’sdefinitely oneof the most attractive hatchbacks to sit in, with an interior that beautifully blends the traditional and the modern.

There’s nothing that has quite the style to match that of the Alfa Romeo Giulietta, but a few give it a good go:

The Alfa Romeo will undoubtedly draw you in with the way it looks,andkeep you with the way it drives and how entertaining and economical it is to live with. This isdefinitely acar that will get under your skin if you choose to let it.