More and more drivers are shunning traditional hatchbacks and multi-purpose vehicles in favour of SUVs - and so the Citroen C3 Aircross has had to become the master of disguise. That’s because this car is basically a medium-sized hatchback/MPV that’s been styled to look like one of the popular SUV models. And this is precisely what makes it ideal for small SUV buyers – it’s roomy, flexible and offers great visibility.

The Citroen C3’s looks can clearly be traced back to those of its predecessor, the C3 Picasso, with added ride height, a boisterous attitude, and Citroen’s traditional quirkiness.

At the front of the car, you’ll notice is the prominent ‘skid plate’ on the bottom edge of the front bumper. This is more likely to come into contact with a kerb than a rock in the middle of nowhere – still, it offers that level of protection when traversing narrow streets and country roads.

Above this sits an oblong-shaped grille that also houses the numberplate, and on either side are huge light units integrated into the front bumper. These house the main lights and the indicators. Above the bumper is a narrow band across the front of the car that integrated the Citroen badge and LED daytime running lights. 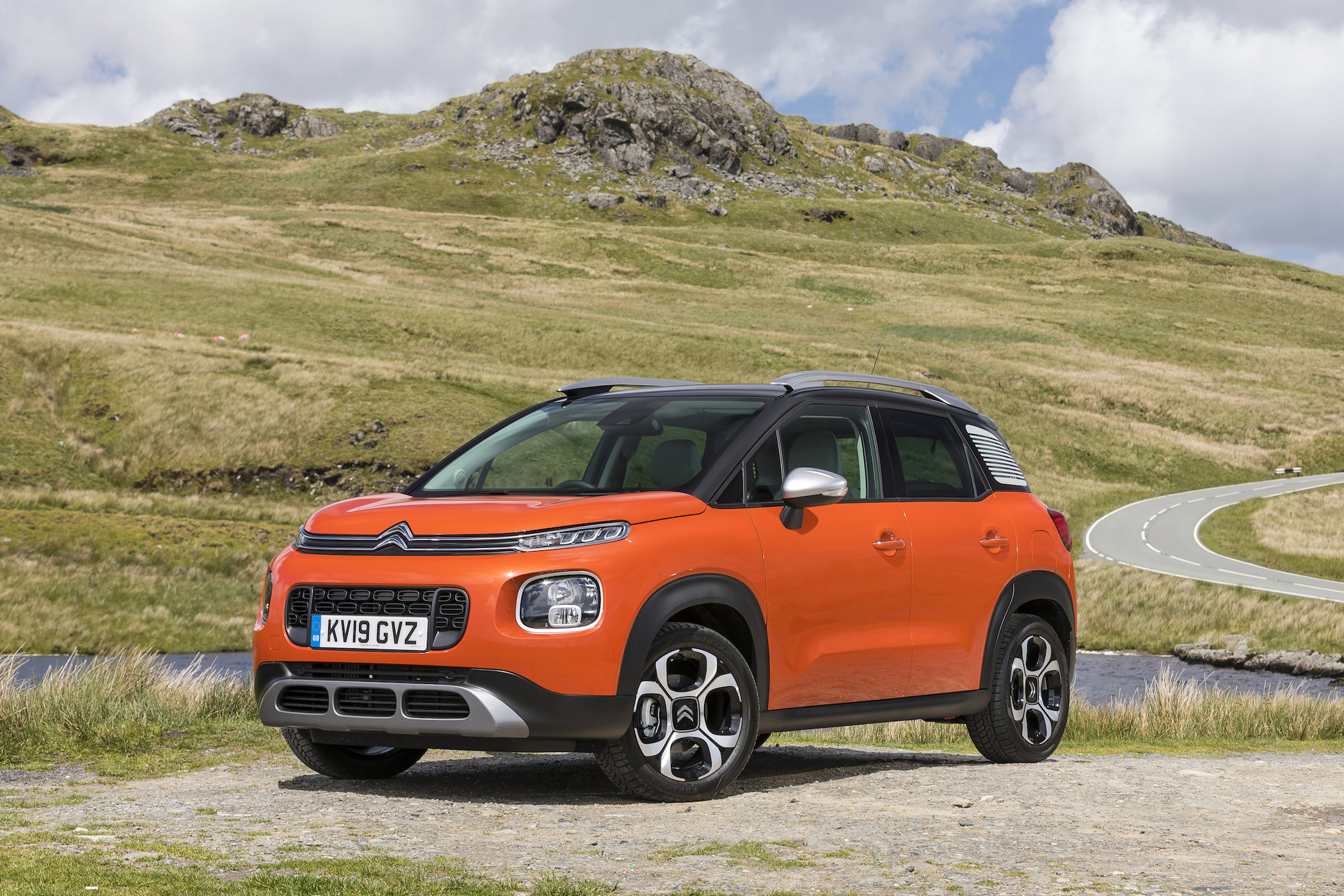 The car’s tall, vertical sides make getting into and out of it easy, and the roof (which many owners opt for in a contrasting shade from the body) plays host to two roof rails – in case it eventually does snow in the UK and you fancy taking the family snowboarding.

At the back, the tailgate extends down to a low rear bumper, and the large opening allows easy access to the boot. Overall, it’s a bold looking car, designed to look larger while still remaining compact in size.

There’s really no need to go beyond the entry-level 1.2-litre turbocharged petrol engine. This has more than enough zing for everyday to-ing and fro-ing in traffic, and sounds pretty decent too.

If you need to do a vast number of miles, there’s also a 1.5-litre diesel. It’s actually slower than the best petrol model and a little noisier. It does drink less fuel, as you’d imagine.

The suspension on this Citroen model has been deliberately set up to be soft, and so provide a comfortable ride. It’s certainly not bad at all, but you’ll need to be prepared for the car to lean over a bit in corners if you drive with any sort of enthusiasm. 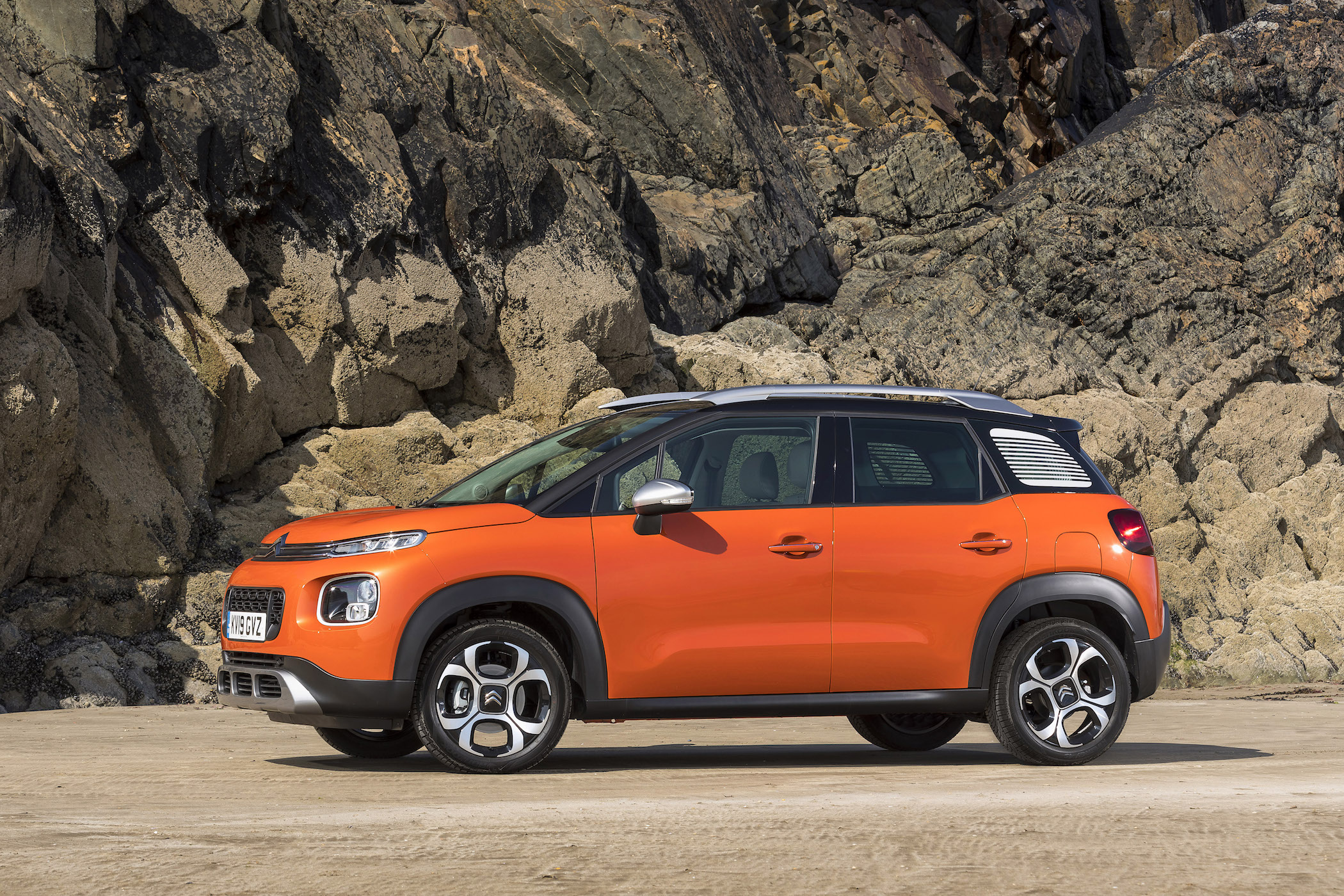 The suspension on this Citroen model has been deliberately set up to be soft, and so provide a comfortable ride.

Where the design theme on the outside of the Citroen C3 Aircross is all about oblongs with rounded corners, so this continues inside and with great success.

Moving around the dash, things get slightly more conventional. There’s a large instrument binnacle directly ahead of the driver, which contains a rev-counter, speedometer plus water temperature and fuel gauges. There’s also a digital display beneath these that contains details of your average economy, range to empty, average speed and other such necessary info. 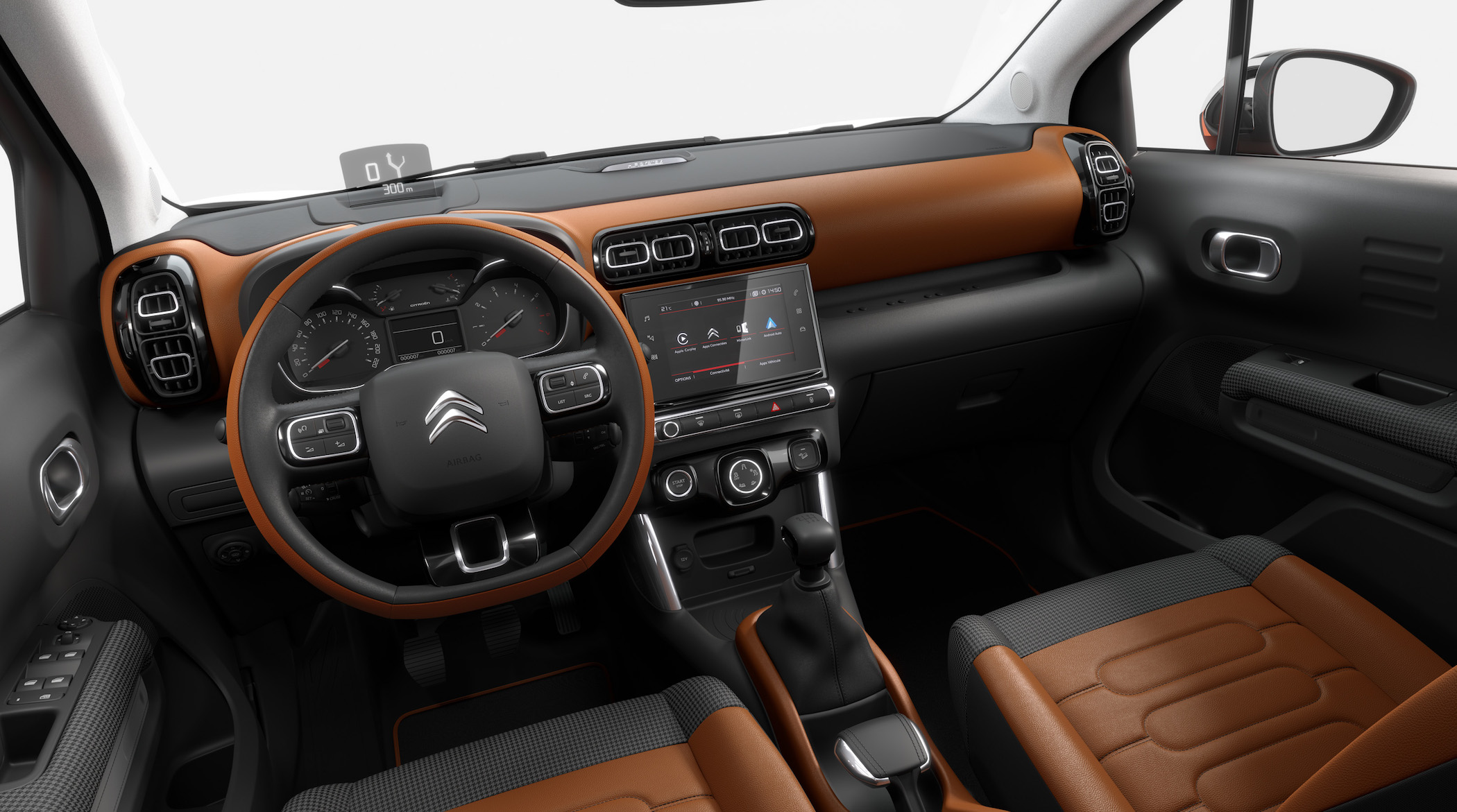 In the middle of the dashboard and below the vents is a large touchscreen, through which you control most of the car’s functions, including the Bluetooth, the Apple CarPlay/Android Auto systems, sat-nav, the DAB radio and the climate control.

Below the screen is a row of buttons for the windscreen demist and rear window demist, hazards and door locks. And that’s about it. There are a few handy cubbies below this, and a USB socket.

Much of the dashboard is covered in the same material as the seats, which makes it feel really nice, and everything you touch and move on a daily basis feels like it won’t break any time soon.

The seats themselves are deliberately quite flat, in order to cater for people of more shapes and sizes. This works surprisingly well. They’re also set quite high, even in their lowest position, which gives a great view out – you’ll be able to look over the heads of parents to spot your little ones at school pick up.

There’s loads of space for a couple of tall adults up front, with a decent amount of legroom. If you’re tall it might be worth avoiding a model with the panoramic glass roof because this cuts down on headroom. The same applies in the back seats, but if you have opt for a C3 Aircross without the roof there’s decent enough space for 3 adults to sit side by side, although they might need to be on friendly terms.

Most versions have a 60/40 split rear seat that’s easy to fold down. On Shine Plus models, the seats can be slid back and forth to vary boot space or rear legroom as required. Talking of boot space, there’s loads of this – enough for around half a dozen carry-on cases. 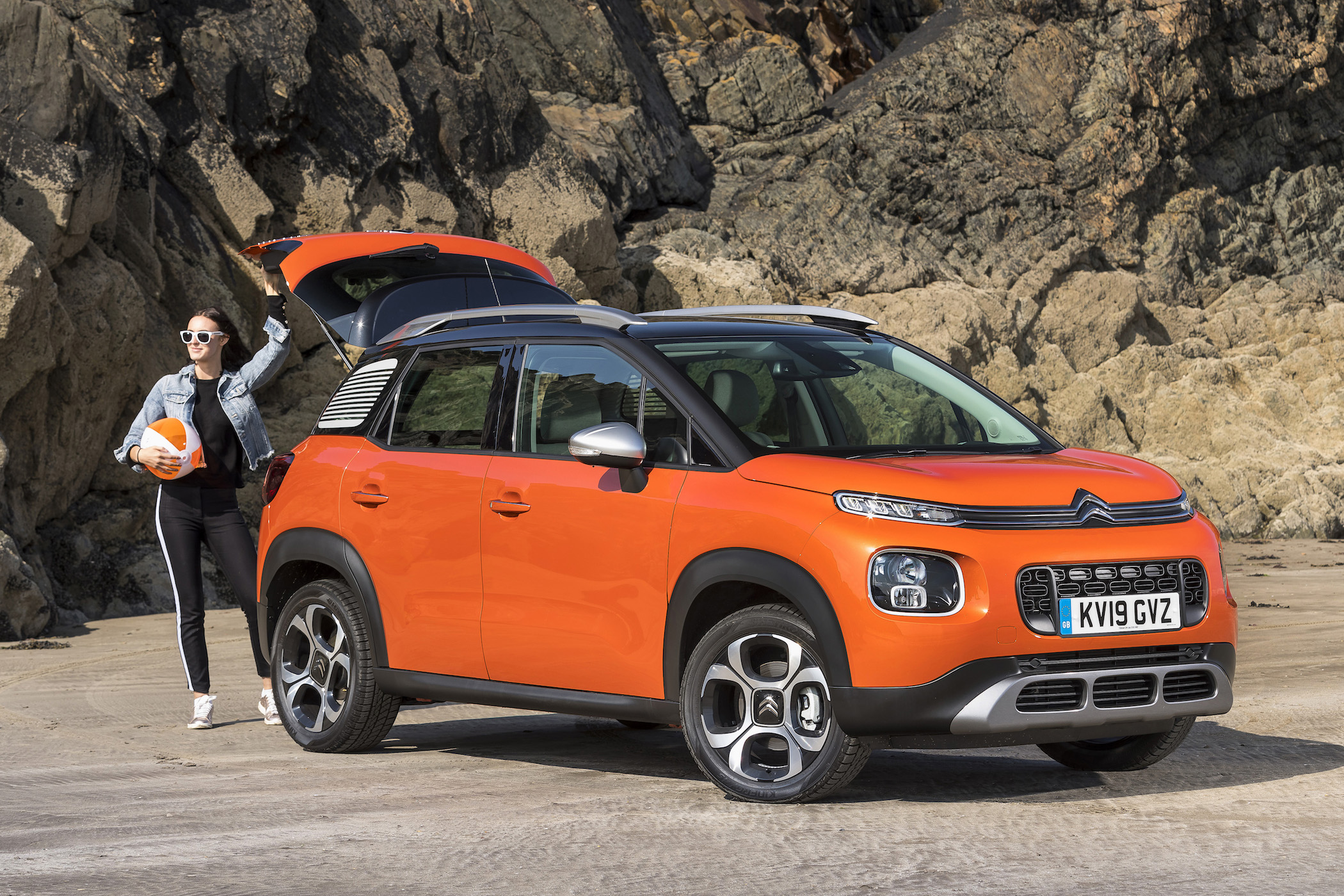 Any petrol car with an average economy figure approaching 60mpg is very efficient indeed, and this is the case with the Citroen C3 Aircross. This is a car you’ll be glad to run if you’re on a tight budget.

The 1.2 petrol offers an average of 58.9mpg, while the 1.5-litre diesel will do an official 70.6mpg. Basically, you can fill up and forget about it for a long while.

The Citroen C3 Aircross provides just what young families need, namely practical transport that is also exceptionally cheap to run, and which manages to look more than a little bit funky in the process. The various colour schemes are designed to make the C3 Aircross stand out, and little extra touches such as roof rails (that look like surfboards) also add that little element of coolness.

For funky spacious family vehicles, look at these alternatives:

If you’re the sort who doesn’t really do grey, black or white, then the Citroen C3 Aircross could be for you. It’s genuinely unusual, but at the same time completely practical and usable. Add in some super-low running costs and decent standard equipment levels, and you can’t really go wrong.