Are there more heart-warming images of HRH Queen Elizabeth than the ones of her cruising around, headscarf on, in her beloved Land Rover Defenders? The Royal family has a particular penchant for anything JLR, from Jaguar saloons for public engagements, to Range Rovers for family gatherings and Landies for stalking at Balmoral (see Olivia Coleman in The Crown). So it seems only fitting for our pre-Jubilee Weekend Wheels pick to be the new 2022 Land Rover Defender.

This 2022 Defender is a beast of an off-roader. When Land Rover announced it was completely overhauling the Defender for 2020, sceptics were nervous. The Defender first debuted in 1948 as the I Series, followed by the Series II 10 years later, the Series III in 1971 and finally in 1990 the Defender. 70 years of heritage was at stake. But it’s safe to say that motoring journalists and customers alike have been balled over with this new breed of Defender. 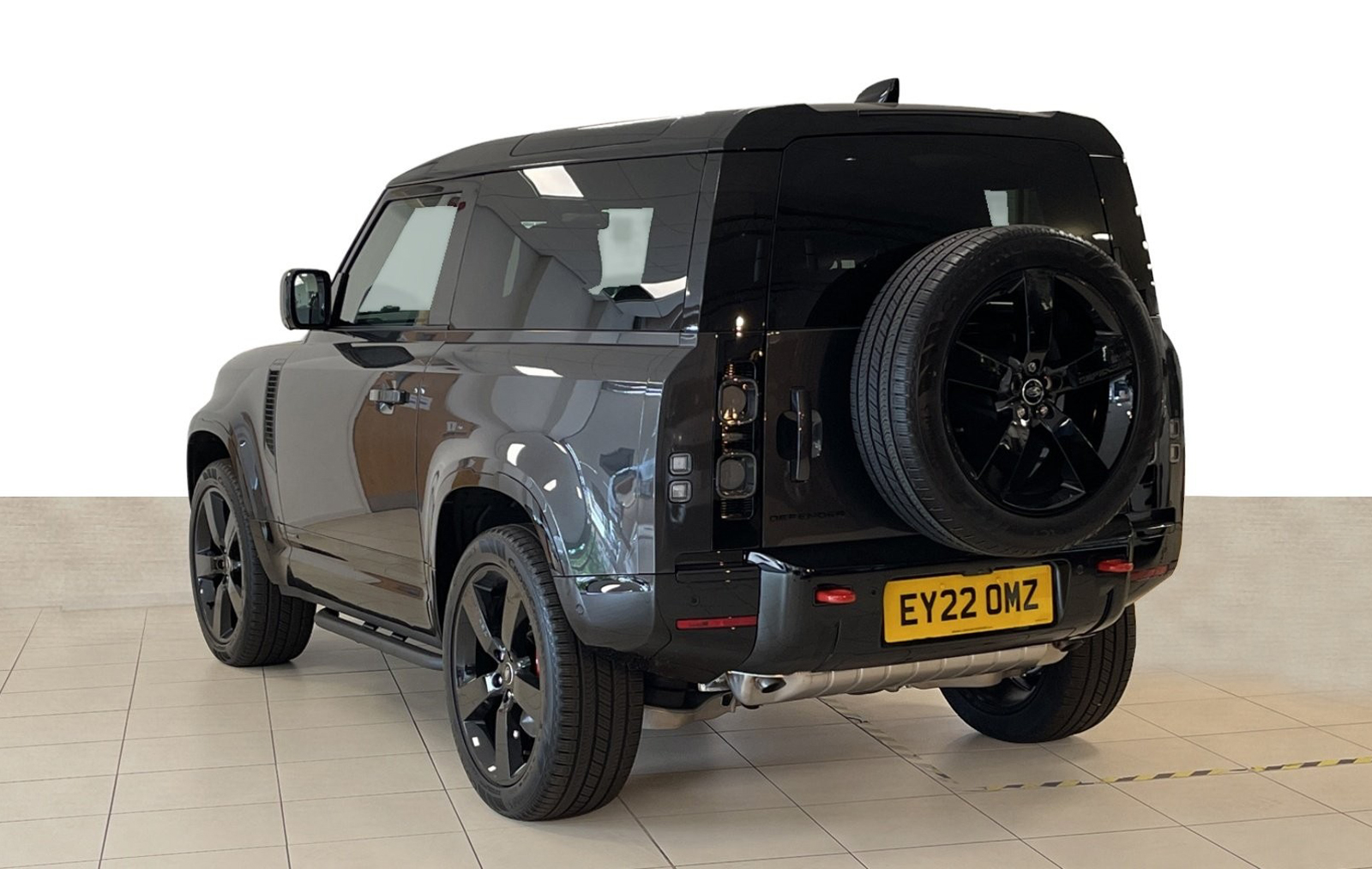 Utilitarian, square and boxy, you can clearly see the old Defender DNA in the design. But with some of the smooth suaveness of a Range Rover, it looks just as good coated in mud as it does as a squeaky-clean Chelsea Tractor. We really love how bold and daring this Defender looks in dark charcoal grey with blacked-out windows.

This 90 model is the short wheelbase version with three doors. Yet with six seats (don’t forget the central folding jump seat up front) it’s super family-friendly and great for sharing between friends on weekends away. The selling point of this car though is the interior. It’s just COOL: Wipe-down surfaces, industrial rough and ready features like grab handles, washable floors, cut-out doors with visible bolts – it’s designed with rugged practicality in mind. And a little plushness. The tech is definitely not back to basics; as well as the 11.4-inch central screen, you get a head-up display, keyless entry, driver seat memory (press a button and it shifts into your setting) and heated and cooled seats, to name a few goodies. The sliding roof is a particular standout and we love the open-top safari feeling it gives. You'll fancy yourself king or queen of the road! 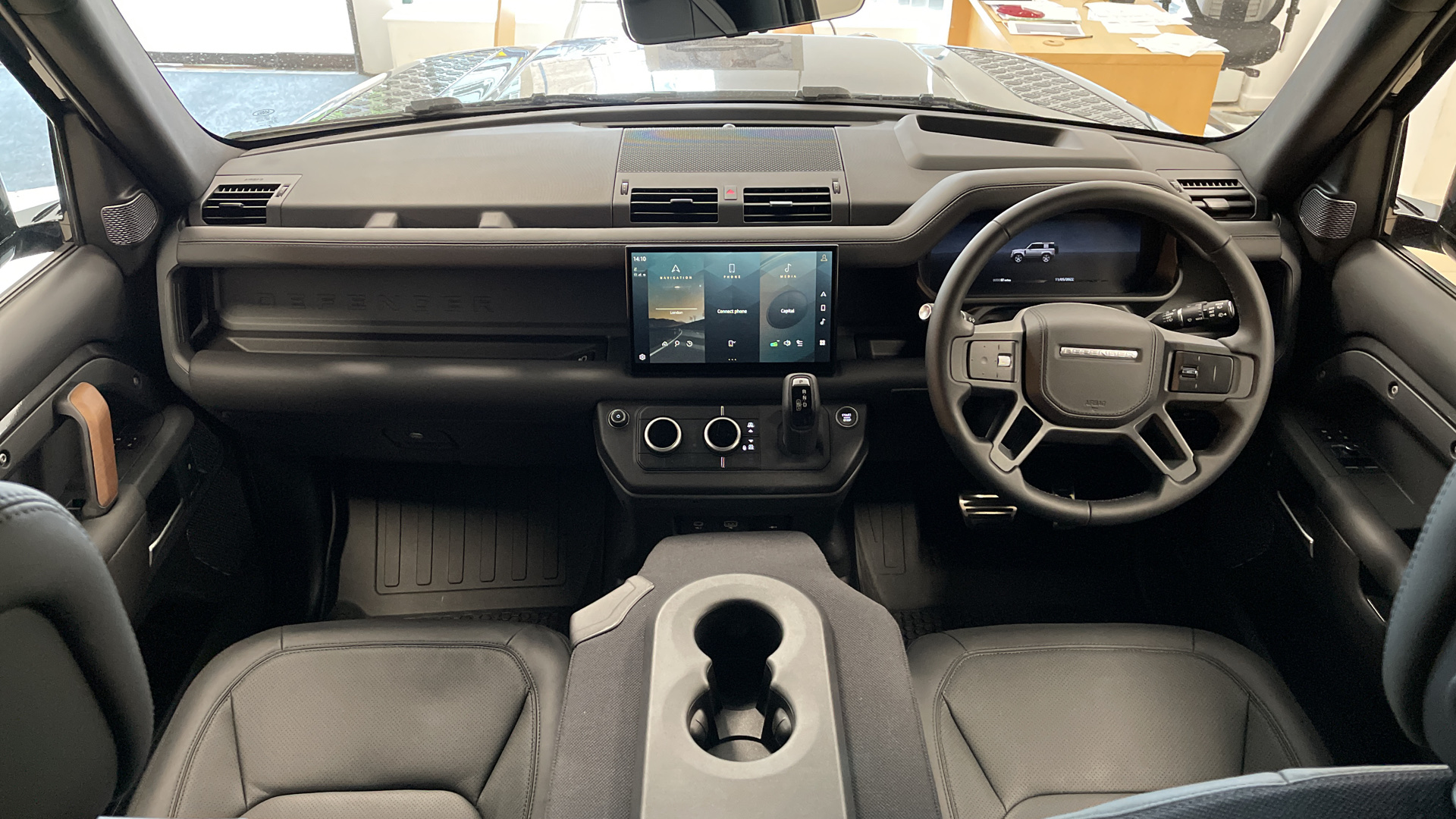 Engine-wise, this P400 six-cylinder is a more sensible buy than the top-end V8. It’s also a mild-hybrid, which is great for keeping running costs down. Four-wheel drive and an eight-speed automatic gearbox are standard, too.

Don't be fooled by its off-roader status; when you take the Defender down the motorway or a country lane, it's smooth, doesn’t roll in the corners, and is very cushy over bumps and uneven surfaces. When you take it off road, the Defender is nothing short of phenomenal! The wading depth is so high you could cross the Amazon and the Land Rover’s Terrain Response makes tackling mud, gravel, sand and slopes as delightful as sailing on a calm sea, in Bill Gates' yacht. Hook up a braked 3,500kg trailer and all country tick boxes are checked.

If you want to commemorate the Jubilee weekend in style then grab this Defender before it goes! It's £99,950in our online showroom online showroom now. With only 87 miles on the clock, it's as close to brand spanking new. Yet it can be at your door in as little as 72 hours.

A 4x4 car is one that is fitted with four-wheel drive, which means that the power created by the engine is sent to all four wheels.
View more